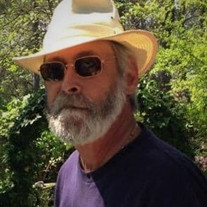 Harold Lloyd Roach, Jr., 67, of Forest Acres, died Thursday, January 7, 2021, surrounded by his loving family and listening to The Beatles greatest hits. Born April 13, 1953, in Columbia, he was a son of the late Harold Lloyd Roach, Sr. and Cynthia Miller Roach. Known by his friends as, “Hal”, he was loved by all for his easy-going personality and sense of humor. One of his favorite past-times was watching football, which he did religiously. He was a superfan of the Green Bay Packers and could often be seen wearing head to toe Packers gear and driving his green Corvette around town. He had a passion for caring for his lawn and took pride in having the nicest on the block. He certainly had a green thumb! Hal also enjoyed grilling and cooking everything from BBQ, to what his daughter refers to as “Dad’s famous spaghetti” and got many of his inspirations from watching Food Network. When he was not at home, you could find him at Edisto Beach next to the ocean. His childhood was all about little league baseball. He loved to reminisce about the excitement of games. When his own grandsons started playing, he really enjoyed cheering them on. He and his brother, Stan, were as close as two brothers could be. Where one was, you could find the other. Hal graduated from AC Flora in 1971 and attended Midlands Technical College for technical drawing. When he realized that was not for him, he moved on to various careers, eventually realizing that he could sell water to a fish. He was a darn good salesman. He worked at Fireplace Plus for many years, selling grills and gas log fireplaces. When they closed, he and his daughter managed their tanning salon, Tan Beyond, where patrons referred to him as “Dr. Tan.” Hal is survived by his daughter, who he called “Sweet Pea”, Ashleigh Roach Taylor (Zachary) of Columbia; his grandchildren, Shane Halyn Porter, Jaden Bryce “JB” Porter, Chloe Makenzie Porter, and Fiona Scarlett Taylor; his brother, Stanley N. Roach of Columbia; his niece, Andrea Roach Westmoreland (Tripp) of Gilbert; as well as his great nephew and great niece, Brantley and Chesney Westmoreland. In addition to his parents, he was preceded in death by his wife, Kathryn “Lynn” Thomas Roach. The graveside service for Hal will be held at 3 o’clock Monday, January 18th at Greenlawn Memorial Park, Serenity Garden, North End of Windwan Drive, Columbia, with Pastor Mark Buchan officiating. Shives Funeral Home, Trenholm Road Chapel, is assisting the family. Everyone is invited to attend but will be asked to abide by the state’s recommendations of wearing masks and social distancing to provide a safe environment for all. The family would like to acknowledge their appreciation to Heart of Hospice for making his final months comfortable and providing support to them. In lieu of flowers, memorials may be made to The American Institute for Cancer Research, 1560 Wilson Boulevard, Arlington, VA 22209 or by visiting https://aicr.salsalabs.org/honor-memorial/index.html Everyone in attendance is encouraged to wear their Green Bay Packers gear or green and gold. In the words of John, Paul, George, and Ringo… There are places I'll remember All my life though some have changed Some forever, not for better Some have gone and some remain All these places have their moments For people and things that went before I know I'll often stop and think about them In my life I love you more

Harold Lloyd Roach, Jr., 67, of Forest Acres, died Thursday, January 7, 2021, surrounded by his loving family and listening to The Beatles greatest hits. Born April 13, 1953, in Columbia, he was a son of the late Harold Lloyd Roach, Sr. and... View Obituary & Service Information

The family of Mr. Harold Lloyd Roach, Jr. created this Life Tributes page to make it easy to share your memories.

Send flowers to the Roach family.