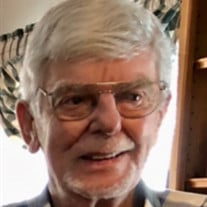 Herbert “Wayne” Hackler passed away August 28th in Agape Hospice. He was diagnosed with COVID 19 on August 20th but also had many underlying health issues. Wayne lost his wife, Jenny, on April 8th; he missed her terribly and is now united with her in heaven. He was a born again believer and did not let any opportunity pass to share his faith. He attended Faith Presbyterian Church in Chapin for many years but later in life enjoyed First Baptist Church of Columbia on television. Wayne was born in Little Rock, Arkansas in 1937 to Herbert Hoover “Hack” Hackler and Virginia Briscoe Hackler. Virginia and Hack divorced, and she followed her brother Joe Biscoe and moved to Detroit Michigan where she met her second husband Edward Dulepka. Wayne was blessed to have Eddie as a stepfather. Wayne met Jenny Balser in high school in Detroit and in 1954 they were married. In 1963 Wayne moved his family south and settled in Columbia South Carolina. His father “Hack” was living in Columbia and they reconnected over their love of fishing. In 1976 the family moved to Lake Murray in Chapin where he competed often in Bass Tournaments over the years, winning several. Our father had many interests. He fished, played golf, (very well in his younger years), tennis, and loved Michigan football and Tom Brady. He referred to Rory McElroy as “I love that Boy” and never missed the chance to watch him play on Sunday afternoon. He loved the game of bridge and would remind you that he was a Life Master. In the late 80’s his CPA invited him to Montana to go trout fishing. In less than 6 months he returned with our mother and started their next great adventure. They purchased two 20 acre tracks and by 1994 they were retired and living in Montana from April to November. He brought his family out to visit as often as possible to enjoy the beauty and nature of the great Rocky Mountains. He even gave himself the nick-name “Liver Eating Hackler”! In 2002, his brother-in-law, Steve Balser, was killed tragically by a rock slide as he watched unable to help or rescue him, and Wayne was forever changed. His love for living in Montana became more difficult as Mom and Dad aged and they realized Montana was still very much a wilderness. They returned to South Carolina after a 2 year detour in Tennessee. Wayne and Jenny are survived by their 3 Daughters; Linda (Jeff) Wheeler, Sheri (Jay) Carr and Jennifer (Jim) Bremerman. 6 Grandchildren; Jessica (Shane) Saum, Zack Wheeler, Kelli (Chris) Partin, Jake Carr, Josh Bremerman, Montana Bremerman, and 5 Great Grandchildren; Tucker & Maggie Saum and Wells, Watson & Wren Partin. Wayne is also survived by 2 Half-Sisters; Cindy and Tonya Hacker and Jenny’s 2 Brothers; Joe and George Balser. The family would also like to thank Ryan at Generations for the kindness and friendship he gave our Dad over the last months, especially because our family could not due to COVID 19 restrictions. It was Wayne’s desire not to have a funeral and both he and Jenny will have their ashes scattered by their three Daughters in Montana. In lieu of flowers, memorials can be made to the Wounded Warrior Project.

Herbert &#8220;Wayne&#8221; Hackler passed away August 28th in Agape Hospice. He was diagnosed with COVID 19 on August 20th but also had many underlying health issues. Wayne lost his wife, Jenny, on April 8th; he missed her terribly and is... View Obituary & Service Information

The family of Mr. Herbert Wayne Hackler created this Life Tributes page to make it easy to share your memories.

Send flowers to the Hackler family.