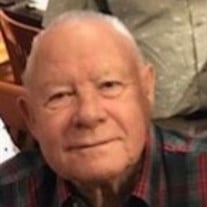 Herman G. Mancil, 83, of Columbia, died on Thursday, April 8, 2021. Born in Andalusia, AL, on October 11, 1937, he was a son of the late Oliver Green and Arrie Anna Lee Mancil. Mr. Mancil attended Sanford High School and served his country in the US Reserves. He retired from ABF Trucking after many years of service. Mr. Mancil enjoyed hunting, fishing and cheering on the Carolina Gamecocks. A hardworking man, he enjoyed time with his family and going camping. Survivors include his wife, Shirley Allison Mancil; daughter, Donna M. Lord (Randy); sons, Jeffrey Mancil (Tammy), Stanley Mancil, and Steven Mancil; numerous grandchildren; great-grandchildren; as well as his sister, Mary Baker; and numerous nieces and nephews. In addition to his parents, he was preceded in death by his brother, Oliver Green Mancil, Jr. The graveside service for Mr. Mancil will be held at 4 o’clock, Monday, April 12th, at Greenlawn Memorial Park, 7100 Garners Ferry Rd, Columbia, SC 29209. The family will receive friends from 6 until 8 o’clock, Sunday evening at Shives Funeral Home, Colonial Chapel, 5202 Colonial Drive, Columbia. The Family would like to sincerely thank the nurses and staff of Prisma Health Baptist Hospital, Friends of Denny Terrace Neighborhood, as well as Dennis Black for their love, care and support. In lieu of flowers, the family encourages you to plant a memorial tree in the outdoors. You may do so by visiting the following link, https://bit.ly/2RtNZaJ; or donate to the South Carolina Wildlife Federation, 455 St Andrews Rd Suite B1, Columbia, SC 29210

The family of Mr. Herman G Mancil created this Life Tributes page to make it easy to share your memories.

Send flowers to the Mancil family.