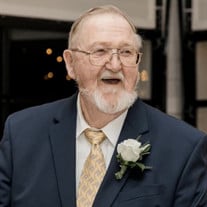 Herman Clinard Rawls, Jr., 81, of Columbia, died on Tuesday, May 3, 2022. Born in Columbia, SC, on July 4, 1940, he was a son of the late Herman Clinard Rawls, Sr., and Reba Boulware Rawls. Mr. Rawls was a graduate of Carlisle Military School and following his graduation he enlisted in the Naval Reserves in May of 1958. After his service in the Navy, he met the love of his life, Betty while with friends. In 1964, they were engaged and later married March 19, 1965, at Bethel Lutheran Church in White Rock, SC. Family meant everything to him, and he was so proud of his children and grandchildren. Mr. Rawls retired from the State of South Carolina where he spent many years in plumbing. Survivors include his children, Edmond B. Rawls (Mary), Kenneth R. Rawls (Marty), and Audrey R. Sawyer (Dwight); grandchildren, Marrett Rawls, Alexander Rawls (Wesley), Lauren McClure (Jamie), Preston Sawyer and Dylan Sawyer; and a brother, Hayne D. Rawls, Sr. (Alice). In addition to his parents, he was preceded in death by his wife, Elizabeth “Betty” Irene Rawls; and sister, Audrey Phillips. The funeral service for Mr. Rawls will be held at 2 o’clock, Monday, May 9th, at Ascension Lutheran Church, 827 Wildwood Avenue, Columbia, SC with Rev. Jackie Utley officiating. Interment will follow at Greenlawn Memorial Park. The family will receive friends prior to the funeral service beginning at 1 o’clock in the fellowship hall at Ascension Lutheran Church. Shives Funeral Home, Colonial Chapel, is assisting the family. Memorials may be made to Ascension Lutheran Church, 827 Wildwood Avenue, Columbia, SC, 29203, Richland County Sherriff’s Office – Project H.O.P.E, 5623 Two Notch Road, Columbia, SC, 29223, or to The Shriners Hospital, 206 Jamil Rd, Columbia, SC 29210.

The family of Mr. H. Clinard Rawls, Jr. created this Life Tributes page to make it easy to share your memories.

Send flowers to the Rawls family.