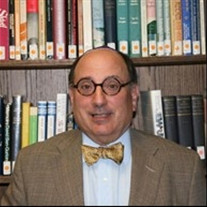 Howard B. Stravitz, longtime professor at the University of South Carolina School of Law, gourmand, wine connoisseur, and beloved by his family and his many friends, passed away on April 30, 2021, at the age of 73. Born and raised in Brooklyn,... View Obituary & Service Information

The family of Mr. Howard B. Stravitz created this Life Tributes page to make it easy to share your memories.

Howard B. Stravitz, longtime professor at the University of South...