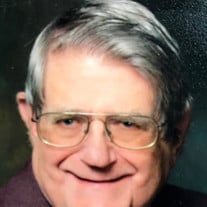 Humphrey Hardison Childers, Sr., 79, passed away at his home of 31 years in Columbia, SC on May 7, 2021, while doing a crossword puzzle and enjoying dinner with his wife. A graveside service will be held at 1 o’clock, Thursday, May 13, 2021, at the Northeast Presbyterian Church Cemetery. A livestream of the service may be viewed by visiting Mr. Childers’ tribute wall at ShivesFuneralHome.com Humphrey was born on November 3, 1941 to James Glenn Childers and Frances Escott Hardison Childers in Nashville, TN. He grew up in Clarksville, TN and graduated from high school at St. George’s School in Middletown, RI. He joined the U.S. Army, serving in South Korea as a company clerk. He then graduated from Florida Atlantic University and continued his education at the University of South Carolina School of Law, where he was president of the Clariosophic Society, and after graduation began his own law practice in Columbia, SC. In 1980, he met Samra Thompson, of Columbia, through mutual friends Joyce and Bill Downey, and they wed on January 24, 1981. They went on to have two children, Humphrey Hardison Childers, Jr. and Samuel Graham Childers. They celebrated their 40th wedding anniversary this year. As part of his profound interest in family genealogy, he was a member of the Magna Charta, Clan Maclean Association, The Society of the Cincinnati, The National Society of the Sons of the American Revolution, the Sons of Confederate Veterans, the Military Order of the Stars and Bars, the Confederate POW Society, and the Sons of Spanish American War Veterans. Through his military service, he was a member of the American Legion and the SC Veterans of Foreign Wars. Socially, he was a member of Spring Valley Country Club and the Robert Burns Society of the Midlands. He was a member of Northeast Presbyterian Church for the past 14 years. He is survived by his wife, Samra Thompson Childers; his two sons, Humphrey Hardison Childers Jr. and Samuel Graham Childers; his daughter-in-law Brittany Braddock Childers, and the person he couldn’t stop talking about, his granddaughter, Elise Adeline Childers. In lieu of flowers, memorials may be made to a charity of one’s choice.

Humphrey Hardison Childers, Sr., 79, passed away at his home of 31 years in Columbia, SC on May 7, 2021, while doing a crossword puzzle and enjoying dinner with his wife. A graveside service will be held at 1 o&#8217;clock, Thursday, May... View Obituary & Service Information

The family of Mr. Humphrey Hardison Childers, Sr. created this Life Tributes page to make it easy to share your memories.

Humphrey Hardison Childers, Sr., 79, passed away at his home...

Send flowers to the Childers family.