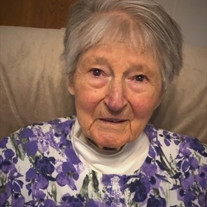 Ida S. Stewart, 96, of Columbia, died peacefully in her home on Monday, January 4, 2021. Born December 27, 1924, in Columbia, she was the daughter of the late Louis Wilbur Smith, Sr. and Ida Jane Gladden Smith. In addition to her parents, she was preceded in death by her husband, Jack Kennemore Stewart, Sr.; son, Jack Kennemore Stewart, Jr.; seven siblings; and her longtime companion, Samuel L. Rhyner. Prior to her retirement, Mrs. Stewart was a mental health specialist at Crafts-Farrow State Hospital. She was a devoted member of Rehobeth United Methodist, where she assisted with the food pantry and was a member of the United Methodist Women. Mrs. Stewart enjoyed baking, cherished spending time with her family, and traveling. She also devoted her time visiting fellow church members and shut-ins in her community. Survivors include her children, Robert Bowen Stewart, II of Columbia, Ida Stewart Fortuna (Jerry) of Blythewood, James Earl Stewart (Gayle) of Columbia, and Livi Stewart Gardner of Columbia; daughter-in-law, Debra Stewart of Timmonsville; six grandchildren, 15 great grandchildren; and two grand dogs. She is also survived by her former longtime companion’s children, Eric Rhyner of Texas, Cynthia Dickerson (John) of Chapin, and Belinda Fulmer of Elgin, as well as a multitude of extended family and friends. A memorial service will be held at 1 o’clock, Wednesday, January 20th, at Rehobeth United Methodist Church with Rev. Dr. Constance Barnes officiating. The family will receive friends prior to the memorial service in the church fellowship hall beginning at noon. Inurnment will follow at Fort Jackson National Cemetery at 3 o’clock. Shives Funeral Home, Trenholm Road Chapel, is assisting the family. Everyone is invited to attend but will be asked to abide by the state’s recommendations of wearing masks and social distancing to provide a safe environment for all. A livestream of Mrs. Stewart’s memorial service will be available by visiting her tribute page at ShivesFuneralHome.com. The family would like to express their gratitude to Mrs. Stewart’s caregivers, Betsy Walsh, Barbara Kennedy and her two daughters, RaShonda and Sharlene Kennedy. In lieu of flowers, memorials may be made to Rehobeth United Methodist Church, 6911 Two Notch Rd, Columbia, SC 29223.

Ida S. Stewart, 96, of Columbia, died peacefully in her home on Monday, January 4, 2021. Born December 27, 1924, in Columbia, she was the daughter of the late Louis Wilbur Smith, Sr. and Ida Jane Gladden Smith. In addition to her parents,... View Obituary & Service Information

The family of Mrs. Ida S. Stewart created this Life Tributes page to make it easy to share your memories.

Send flowers to the Stewart family.