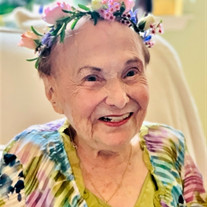 Mrs. Irene Cecelia MacDonald, age 102, passed away, Thursday, October 28, 2021, at the home of her daughter, Jody Newman, in Charleston, SC. One of nine children, Irene was born March 26, 1919, in Whiting, Indiana, daughter of the late Andrew and Theresa (Cihak) Hrubovcak. After marriage, life took Irene from Indiana to Florida, Las Vegas, and finally to Charleston, SC. Irene was wonderfully devoted to her children, Robert Anderson (wife Laura) of Jupiter, Florida, Jody Newman, of Charleston, SC, and her adopted son, Lee Swanson of Fargo ND. Irene was a loving grandmother to Cynthia, Laura, and Jamie (Newman); Colleen and Crystal (Anderson). Grammy had seven great-grandchildren, and a large collection of nieces and nephews, all grateful to have been touched by her kindness. Irene (Grammy) was a strong, determined, and independent woman. She was always intellectually ahead of her time, and a forward thinker. She led by example, be it cooking, gardening, family time, animals, and researching the latest health foods and vitamins. There was never a job too large or too small that she would not tackle. Mom was a devoted Roman Catholic, watching Mass daily and saying the rosary for all of her friends and family in need of extra spiritual help. Her last years were spent in the care of her daughter, Jody, who worked tirelessly to keep her safe and comfortable in her home in Charleston. Special thanks to Mom’s caregiver, Dawnesha Washington. She and her family became a blended family with Grammy’s family. “THOUGH SHE BE BUT LITTLE, SHE IS FIERCE!” (Wm Shakespeare)

Mrs. Irene Cecelia MacDonald, age 102, passed away, Thursday, October 28, 2021, at the home of her daughter, Jody Newman, in Charleston, SC. One of nine children, Irene was born March 26, 1919, in Whiting, Indiana, daughter of the late Andrew... View Obituary & Service Information

The family of Mrs. Irene Cecelia MacDonald created this Life Tributes page to make it easy to share your memories.

Send flowers to the MacDonald family.