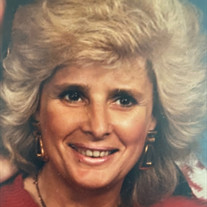 Irmgard “Inga” S. Kuerti, 72, of Columbia S.C (previously of Bedford, N.H) , passed away at home on Saturday, August 1, 2020 after a two and a half year battle with cancer. Born in Leverkusen, Germany on December 23, 1947, she was the daughter of Sabine Schmitz-Latz Krall and the late Johann Latz. Inga was a beloved daughter, mother and grandmother. She was employed for Bayer Aspirin in Germany and later became a hair-stylist and moved to the States where she held and cherished being a stylist for over 55 years. She owned her own salon in New Hampshire where she lived for over 30 years, and later moved to South Carolina to be with her family. Inga continued to work as a stylist where her outgoing personality and genuine loving heart made way for many treasured friendships. Her love and commitment to her family and grandchildren were a true testament of her character. She was an integral part of her grandchildren's lives and was actively involved in their school and interests including soccer, football, basketball and music. Her incredible love for animals was also apparent through the pets she rescued and cared for and through her charitable contributions to various shelters and organizations including the ASPCA. She will be missed by all who knew and loved her and will be forever remembered for her selflessness and beautiful heart. She is survived by her mother, Sabine Krall (Columbia, S.C) son, Randy Kuerti (Golda); and their three daughters, Viktoria, Erin and Stella. (Columbia S.C) and her daughter, Kathy Rhodes (Darren) and their two sons; Ryan and Zachary (Columbia, S.C) Inga is preceded in death by her father, and Step father Eugene Krall. A memorial service to celebrate Ms. Kuerti’s life will be held Saturday, August 15th at 10:30 a.m. at Trinity United Methodist Church, 90 Boney Road, Blythewood S.C. (at Parks Place next to the Youth Center). The Rev. Scott Smoak, Rev. Joann Mann and Rev. Mike Lowder will officiate. The service will take place outdoors and in light of her love for animals, your pets are respectfully welcome. Shives Funeral Home, Trenholm Road Chapel, is assisting the family. In lieu of flowers , please support Inga’s love of animals, and donate to: PETSinc https://www.petsinc.org/donate , pawmettolifeline https://pawmettolifeline.org/get-involved/donate/ , or The Humane Society https://humanesc.harnessapp.com/wv2/donate

The family of Ms. Irmgard S. Kuerti created this Life Tributes page to make it easy to share your memories.

Send flowers to the Kuerti family.