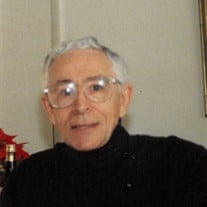 I. Albert (Al) Cohen, 94, of Columbia, passed away on Thursday November 4, 2021. Born on December 16, 1926, in Greenville, South Carolina, he was the son of I. Albert Cohen, Sr. and Rose Levin Cohen. He grew up in Greensboro, NC, and moved to Columbia at age 16. He enlisted in the Army in 1944 and served until the end of World War II in 1945. He was married to Myra Levenson Cohen in Baltimore, MD on November 6, 1949, until Myra’s death September 9, 2002. Music was his biggest accomplishment. He played in the USC marching band before WWI when he was still in High School. He played jazz music with several local combos and Jimmy Farr’s full dance band. Al spent much of his time helping Myra with her art which she pursued until multiple sclerosis made it impossible to continue. Al was by her side until MS took her life. Survivors include his sons, Steven H. Cohen (Helga) and Raymond L. Cohen; grandchildren, Renee Cohen Mulholland (Michael), and David M. Cohen; great-grandchildren, Joseph David Mulholland, Zoe Franziska Mulholland, Harper J. Cohen & Harlon J. Cohen. In addition to his parents, he was preceded in death by his sister, Carolyn Cohen Braudie. His grandfather was Jack M. Cohen an early leader of the Tree of Life Congregation which he joined in 1900. A special thank you to Mary Goodwin and her family for all the love and kindness that they extended to Al for many of his later years. The family will hold a graveside service at 11 o’clock on Monday, November 8, 2021, at Hebrew Benevolent Society Cemetery, 714 Blanding Street, Columbia, SC with Rabbi Sandford Marcus officiating. Shiva to follow at 7 o’clock at the Cohen residence. Shives Funeral Home, Trenholm Road Chapel is assisting the family. In lieu of flowers, memorials may be given to the Tree of Life Temple Congregation, or the Multiple Sclerosis Society.

I. Albert (Al) Cohen, 94, of Columbia, passed away on Thursday November 4, 2021. Born on December 16, 1926, in Greenville, South Carolina, he was the son of I. Albert Cohen, Sr. and Rose Levin Cohen. He grew up in Greensboro, NC, and moved to... View Obituary & Service Information

The family of Mr. Isadore Albert Cohen, Jr. created this Life Tributes page to make it easy to share your memories.

Send flowers to the Cohen family.