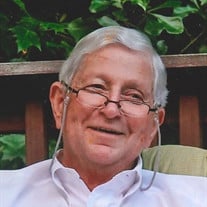 Jack Shelton Graybill passed into the arms of our Lord, Jesus Christ, at home on Tuesday, December 8,2020. Born January 22, 1928 in Columbia SC, Jack Shelton Graybill was the youngest son of the late Cecil Eugene Graybill and Pearl Kennedy Graybill. He attended Schneider Elementary, Hand Middle & Dreher High School. He graduated from the University of SC with Bachelors in business administration in 1949. While at Carolina as a fun-loving SAE, he glimpsed a lovely raven-haired Tri Delta, Susan Tennent McElveen. He “won” her heart and they became “one”, marrying on June 2, 1951. They made their home in Columbia and raised 4 daughters. Jack began his professional career in sales, working for the Sewell Manufacturing Co of Bremen, Georgia, selling tailored suits to fine clothiers from West Virginia to Florida alongside his father and older brothers. Always a snappy dresser, he polished his keen knowledge of the weft and the weave of fabric during those years on the road. No detail was ignored. By 1960, he and Susan were raising their growing family and the desire to spend less time away from home was critical to him. Jack chose to go to work for the Alester G. Furman Co. as a stockbroker. In 1964, he went to work with The Robinson-Humphrey Company, based out of Atlanta, Georgia. He was a bond specialist and eventually became the manager of the Columbia branch. During his years in finance, Jack mentored many young brokers, not only in business, but more importantly in life skills and the significance of personal presentation. He retired at age 77 from Smith Barney to enjoy more many more years with his beloved bride and family. Involvement in the community was of great importance to Jack. Many organizations including Providence Hospital, The Riverbanks Zoo, and St. Andrew’s Society benefited from his participation and leadership. He enjoyed membership in various civic and social organizations. In particular, he and Susan focused their efforts upon educational institutions including the University of SC and Presbyterian College. They gave generously, so that others would have the opportunity of an education. Jack & Susan loved to travel, enjoying many trips across North America, to the Caribbean, to Europe and the British Isles (especially Scotland from which both descend). They enjoyed time at Lake Murray, Litchfield Beach, Blowing Rock, and Hilton Head Island. So many friends were met along the way and many introduced to boiled peanuts and his Carolina Smiles. And, oh, how he loved to dance, especially with his “Hen”. The tunes of the Big Band era would have him on the dance floor shagging with Susan or his 4 daughters. Anyone who had the opportunity to dance with him or be taught by him was fortunate indeed. But Faith and Family were central focus of Jack’s life. His belief in Jesus Christ as His Lord and Savior was his bedrock. Together, he & Susan laid the cornerstone for their family on it and raised their family as Presbyterians. Jack served in many capacities from Sunday School teacher to Deacon & Elder Emeritus. Jack is survived by his wife, Susan Tennent McElveen Graybill; 3 daughters: Susan Tennent Graybill Hodges (David), Margaret Powers Graybill Strickland (Joe), Elizabeth Shelton Graybill Suber (Jack); and son-in-law, Jim Morton (Merrio). He is also survived by 11 grandchildren and 14 great-grandchildren, and much extended family. He was predeceased by daughter, Lucy Kennedy Graybill Morton; his parents; and brothers, Cecil Eugene Graybill Jr. and Robert Lewis Graybill. The family is deeply appreciative of the wonderful care provided by his dedicated Daybreak nurses Kellie, Lucy, and Wanda. A memorial service will be held Saturday December 12 at 11:30am at First Presbyterian Church. Private inurnment will precede the service. All are welcome to attend, however, masks are required, and social distancing is enforced to maintain a safe environment for all. For those unable to attend, a livestream may be viewed by visiting Mr. Graybill’s Tribute Wall at ShivesFuneralHome.com. Due to concerns with Covid-19, there will be no visitation. Shives Funeral Home, Trenholm Road Chapel, is assisting the family. Memorials may be made to the Family’s charitable trust: Susan & Jack Graybill Family Fund, Morgan Stanley Gift, 2000 Westchester Avenue, Purchase, NY 10577.

The family of Mr. Jack Shelton Graybill created this Life Tributes page to make it easy to share your memories.

Jack Shelton Graybill passed into the arms of our Lord, Jesus...

Send flowers to the Graybill family.