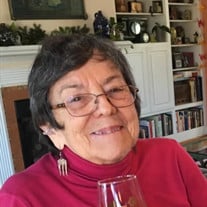 It is with great sadness that the family of Jacquelyn Eileen Guy Reitenga announces her sudden passing on Sunday, July 5, 2020 at the age of 84. She was the adored wife of the late Robert W. Reitenga (2000), devoted, loving mother to sons John (Heather), Barry, and daughter Amy (Roger), cherished grandmother of Robert (Meghan), Krista (Patrick), and great grandmother of Orion. She was the cherished "Grandma Jackie" to Amelie, Florence,Jade, Garrett, and Sammy. Jackie will be fondly remembered and sadly missed by her nieces, Pam (Tim), and Jayne (Jay), as well as her extended family in Canada, and all those whose lives she touched in Michigan, Florida,Tennessee, and South Carolina. She is predeceased by her sister, Shirley (2014). Jackie was born October 11, 1935 in Harrisburg, Pa. to loving parents Caroline (Guy) and Herbert Guy. The family lived in Charleston, before moving to Kalamazoo, Mi. where Jackie graduated from Kalamazoo Central High School (1954). Jackie thoroughly enjoyed music, she played the violin and loved to dance. She met an extraordinarily gifted pianist, the love of her life, her adored Bob, with whom she shared 45 years of happiness. Jackie's proudest accomplishment was her family and she was an incredibly devoted wife and loving mother, but her dynamic energy did not stop there. While raising her family she began a career in real estate, quickly becoming a member of the Million Dollar Club, of which she remained for several years. At the same time she was a very active member, and an inspiration to many, serving her community as leader of the Women's Council of Realtors, American Business Women's Association, Junior League, and the Germania Club while still finding time to coach the Douglas MacArthur PomPom Squad and attend high school wrestling matches and track meets. Jackie enjoyed her golden years in Florida volunteering, golfing, playing mahjong, and enjoying her many friends. She chose to move to Columbia, South Carolina and the Harbor Chase community, so she could be close to her oldest son John in her last years where she was well taken care of and loved. She will be celebrated in a private family memorial later in the year.

It is with great sadness that the family of Jacquelyn Eileen Guy Reitenga announces her sudden passing on Sunday, July 5, 2020 at the age of 84. She was the adored wife of the late Robert W. Reitenga (2000), devoted, loving mother to sons John... View Obituary & Service Information

The family of Mrs. Jacquelyn G. Reitenga created this Life Tributes page to make it easy to share your memories.

It is with great sadness that the family of Jacquelyn Eileen...

Send flowers to the Reitenga family.