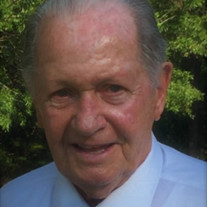 James Timothy Lail, 89, of Blythewood, died Monday, February 1, 2021. Born January 4, 1932, in Ridgeway, SC, one of seven children of the late Obie William Lail and Leona Carroll Lail. Mr. Lail was a US Army veteran who honorably served his country during the Korean War. He was a devout Christian and had a strong faith in God. Prior to his decline in health, he was very active in his community and church activities. He enjoyed tinkering and woodworking in his shop and was a former member of the Masonic Lodge. Mr. Lail was employed as a store manager for McCrory Stores until his retirement. Survivors include his son, Craig Lail, and his two sons, Bryce and Brody. Mr. Lail is also survived by his wife, Helen Ellison Lail; stepdaughters, Debbie Erskine (David), Donna Sugarman, Denise Young, and Susan Miller; as well as their grandchildren and great-grandchildren. In addition to his parents, he was preceded in death by his first wife, Madonna Brooks Lail. A funeral service for Mr. Lail will be held 2 o’clock Thursday, February 4th at Shives Funeral Home, Trenholm Road Chapel, 7600 Trenholm Road Ext., Columbia, SC. Everyone is invited to attend but will be asked to abide by the state’s recommendations of wearing masks and social distancing to provide a safe environment for all. A livestream of Mr. Lail’s service will be available by visiting his tribute page at ShivesFuneralHome.com. Burial will be held at 1 o’clock Sunday, February 7th, at Palatka Memorial Gardens, 4070 Silver Lake Drive, Palatka, FL. In lieu of flowers, memorials may be sent to the American Parkinson Disease Foundation, PO Box 61420 Staten Island, NY 10306.

The family of Mr. James Timothy Lail created this Life Tributes page to make it easy to share your memories.

Send flowers to the Lail family.