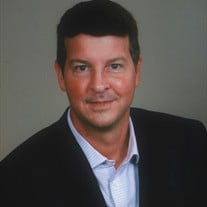 James Eric Shell, 45, of Columbia, passed away Wednesday, August 19, 2020 following a brief illness. Born December 22, 1974 in Orange Park, Florida, he was the son of Amy Eargle Shell and the late James Thomas Shell. Eric moved with his family from Florida to Lexington as a young child. While growing up in Lexington, he and his brother were active in Boy Scouts of America. He shared this passion with his father, who was his troop leader, and followed in his father’s footsteps ultimately earning the highest rank of Eagle Scout. In his youth, he attended St. Stephen’s Lutheran Church. Eric was a 1992 graduate of Lexington High School. As a student, he fell in love with sports and athletic training. This enabled him to earn a scholarship to Clemson University where he was an athletic trainer for the football team. While there, Eric was member of the Alpha Tau Omega fraternity. He remained a diehard Tiger fan, becoming an IPTAY member upon his graduation in 1997. He deeply enjoyed attending three football National Championships and traveling around the country supporting his alma mater. Eric shared his enthusiasm of Tiger sports with his children and family, involving them in all his adventures. Eric lived his life with zest, making great memories with everyone he met along his journey. All his family and friends especially enjoyed hearing his stories and tall tales. Most importantly, Eric was a dedicated husband, father, son, brother, uncle, and friend. He met his wife, Amanda, on New Year’s Eve in 2002 and was blessed by a 13-year marriage full of love. During their 17 years together, they enjoyed attending Dave Matthews Band concerts, supporting his Tigers and her Gamecocks, and their famous impromptu dance parties in the living room. He completely adored his family, always taking the opportunity to spend quality time with his loved ones. Eric never missed a school function or important event in his children’s lives. Being a hands-on parent, coaching his daughter and son in soccer, as well as his son’s t-ball team just seemed only natural to him. Eric loved his family vacations to Litchfield Beach and had become quite fond of the family fishing trips to the river. A dedicated Christian, Eric loved the Lord and was an active member of Trenholm Road United Methodist Church, where he served on the preschool board for the last seven years. He was employed by Wellcare/Centene as a Senior Special Unit Investigator. Eric was a talented artist, an avid reader and enjoyed spending time in his yard, playing golf, as well as swimming in the pool with his children. Surviving in addition to his mother of Lexington are his wife, Amanda Leach Shell; children, Ansley Elaine Shell and Landon James Shell; brother, Anthony Thomas “Tony” Shell (Wendy) of Little Mountain; father-in-law, Daniel Leach of Cayce; mother-in-law, Mary Leach of Columbia; sister-in-law, Sherry Ray (David) of Columbia; nephews, Tyler Shell and Tanner Shell; niece, Ashlynn Ray; uncles, Robert C. Shell of Charlotte, NC and Robert C. Eargle (Gail) of Raleigh, NC; as well as cousins. The celebration of life for Eric will be held privately at Trenholm Road United Methodist Church with Reverend Joel Jones officiating. Shives Funeral Home, Trenholm Road Chapel, is assisting the family. A livestream will be available at 2 o'clock Monday, August 24th by visiting https://www.shivesfuneralhome.com/current-webcast/. In lieu of flowers, memorials may be sent to the Cystic Fibrosis Foundation, SC Chapter, 4151 Spruill Avenue, Suite 250, North Charleston, SC 29405, Leukemia and Lymphoma Society, Georgia-South Carolina Region, 4141 Columbia Rd Ste D, Martinez, GA 30907 or to Trenholm Road United Methodist Church, 3401 Trenholm Rd, Columbia, SC 29204.

The family of Mr. James Eric Shell created this Life Tributes page to make it easy to share your memories.

Send flowers to the Shell family.