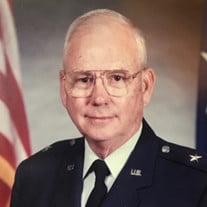 Brigadier General James H. Tuten, a key figure in the growth and leadership of the South Carolina National Guard for more than four decades, died on June 12, 2020. He was 89 years old. General Tuten’s life was dedicated to his country, his faith, and his family. As an Air National Guard officer and leader, he was a friend and mentor to every airmen and soldier he served with. He was a rare leader who possessed the perfect balance between compassion and command, and was widely respected by his subordinates and peers. At the time of his retirement in 1992, General Tuten was serving as Deputy Adjutant General, concluding 43 years of faithful service to his state and nation. During his Air National Guard career, he was ordered to active duty three times: in 1950 during the Korean War, in 1961 during the Berlin Crisis; and in 1988 when he became the first Air Guardsman to become the United States Property and Fiscal Officer for South Carolina. In that capacity, General Tuten was accountable for federal funds and property in possession of Air and Army Guard units in the state. He served concurrently as Federal Contracting Officer for the state. General Tuten was born in rural Hampton County and grew up during The Great Depression, an era which – as with thousands of South Carolinians – imprinted lessons which forever guided his morals and work ethic. He graduated from Furman High School and attended Columbia Commercial College and The University of South Carolina. He enlisted in the South Carolina Air National Guard in 1949. He was commissioned a second lieutenant in 1956 and served with excellence in numerous positions, rising to the federally recognized rank of Brigadier General. When he was appointed Deputy Adjutant General in July 1987 by Major General T. Eston Marchant, General Tuten was the first Air Guardsman to hold this post. He was promoted to Brigadier General in 1988. General Tuten was elected to Richland County Council in 1998 and re-elected four years later. On Council he was known for fiscal realism and for his ability to work across party lines. He was the recipient of numerous awards and decorations, among them the Unites States Air Force Distinguished Service Meal as well as the South Carolina Distinguished Medal. He also received the Order of the Palmetto, South Carolina’s highest civilian award. General Tuten was a lifetime member of the Air Force Association, the National Guard Association of South Carolina, the National Guard Association of the United States, the National Rifle Association, and the American Bible Society. He served two terms as president of the National Guard Association of South Carolina, and one term as a member of the Executive Council of the National Guard Association of the United States. He was a member of the American Legion, the Military Officer’s Association of America, and the University Club. General Tuten’s commitment to his faith was as strong as his dedication to country. He met his wife Elizabeth Plexico at church. They celebrated their 60th wedding anniversary in 2019. He was a founding member of Cedar Creek Baptist Church where he served several terms as a deacon and taught Sunday School for many years. In April 2013, Cedar Creek Baptist Church, which he was instrumental in organizing, conferred upon him the office of Deacon Emeritus. He was a Gideon and participated regularly in distributing bibles to new enlistees at Fort Jackson. He was a member of the Board of Directors of the Domestic Abuse Center and was a member and past board chairmen of the Palmetto Unified School District (South Carolina Department of Corrections). He was a past Moderator of the Columbia Metro Baptist Association, past chairman of the board of directors of the Columbia Family Service Center. He serviced on the board of Columbia’s Centerplace of the Homeless and Friends of the Richland County Public Library. General Tuten is survived by his wife, the former Elizabeth Plexico of Columbia, and their sons James Daniel (Danny) of Castle Rock, CO, and William Lackey (Bill) and Stella McGehee Tuten of Charleston. General Tuten served in many capacities, but perhaps the role he cherished most was that of “Poppa” to James Ethan, Evelyn Elizabeth, Henry MacGregor, and Katherine Bishop Tuten. He is also survived by his sister-in-law Phoebe Tuten of Honea Path. In addition to his parents, George Theodore and Thelma Gohagan Tuten, he was predeceased by his brothers Marion Theodore and Wilbur Jennings Tuten and sister, Maree Tuten Strobel. General Tuten will lie in repose and be available for public viewing from 9 until 4 o’clock, Sunday at Shives Funeral Home, Trenholm Road Chapel, 7600 Trenholm Rd. Ext., Columbia, SC. A visitation will follow from 5 until 7 o‘clock in the evening. A funeral service, conducted by Dr. James W. Thompson, III, assisted by the Dr. Joseph B. Willard, General Tuten’s nephew, will be held at Cedar Creek Baptist Church, 1920 Cedar Creek Road, Blythewood, SC, on Monday, June 15th, at 11 o’clock. Internment with full military honors will follow at the Cedar Creek United Methodist Church cemetery. Pallbearers and flag bearers will be members of the South Carolina Air National Guard and Honor Guard. Honorary Pallbearers are members of the Joy Sunday School Class, which General Tuten taught for many years, as well as Col. Randolph Frick (USAF Ret.), Brigadier General Tom McLean (USAF Ret.), Col. Robert Smart (USAF Ret.), Col. John Cloyd (USAF Ret.), Edward and Rene Clark, William Sticklin, Harvey and Beth Shackelford, and Sandra Stoudemire. Posthumous Pallbearers are Brigadier General Stanley Hood (USAF Ret.), Brigadier General Robert Johnson (USAF Ret.), and COL Charles Ballington (USA Ret.). Memorials may be made to the Cedar Creek Baptist Church Building Fund or The Brigadier General James H. Tuten Scholarship with the South Carolina National Guard Scholarship Foundation.

Brigadier General James H. Tuten, a key figure in the growth and leadership of the South Carolina National Guard for more than four decades, died on June 12, 2020. He was 89 years old. General Tuten&#8217;s life was dedicated to his country,... View Obituary & Service Information

The family of James Henry Tuten created this Life Tributes page to make it easy to share your memories.

Send flowers to the Tuten family.