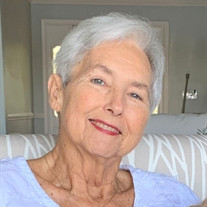 Janet Odom did not lose a moment of life to boredom. She was a cheerleader, beauty queen, pilot, hospital board member for 18 years including chair, and big game hunter, though not all at the same time, at least as far as the family knows. While other moms were home admiring their roses on Mother’s Day, Janet one year was hunting for bear in Canada. While other women were working 9 to 5 in the office or 24/7 at home, she was helping run the family business, raising and selling quail. Janet mastered the art of being both all business and all-out adventurous, fierce and brave, often with a glass of champagne in her hand. The towel that hangs in her bathroom says it all: “Most people hide crazy. We put him on the porch and give him a drink.” Janet Retha Sellers Odom died on Feb. 15, 2022, due to the drug Imbruvica. She was 76. Janet was born in Ozark, Alabama, on July 28, 1945, the daughter of Pascal and Retha Sellers. A U.S. Army brat, she lived for a time in Japan and Germany and attended five high schools before graduating with a diploma and something even better. Her high school sweetheart, William “Bill” J. Odom Jr., became her husband of 57 years. He survives with memories rich and sweet. Janet and Bill raised their two children in Sumter, S.C., imparting to them the fierce family pride that marks life as an Odom. As her daughter, Brittney, tells it, if my mom thought you crossed any of her people, she’d come for you. Together, the Odoms began raising quail in their backyard, eventually starting Manchester Farms in Columbia, S.C., in 1974. It’s the oldest and largest quail producer in the country, producing 80,000 birds a week and selling them to groceries, restaurants, chefs and the like. The Odoms mastered the art of success that goes beyond material things. In business, Bill was the risk-taker. She was the one who calculated the risk. In love, you could always tell how big their argument was by the number of packages she had delivered by UPS the next day. The larger the spat…you guessed it. UPS and Fed Ex grieve her loss as well. Janet survived longer than doctors and loved ones thought she would. She told everyone she was always an overachiever. She is survived by her husband, William “Bill” J. Odom Jr. of Allendale, S.C.; two children – Steve Odom and his wife, Amy, and Brittney Miller and her husband, Matt, both of Columbia, S.C.; and four grandchildren, Will and Emily Odom and Madison and Jack Miller, all of Columbia, S.C. When she entertained, she’d serve the grandkids chocolate milk in a wine glass just so they felt included. She and Madison once bagged a boar and decoupaged it (decorated it by gluing on colored paper cutouts and other artsy stuff). She had a personal relationship with God with many conversations in the deer stand and in nature. She was the first woman to hunt at Groton Plantation in Allendale, S.C. She spent a week rafting the Colorado River. The best days – she didn’t have many bad ones – ended with good friends, a gorgeous sunset and a margarita. Where it says “broke the mold” in the dictionary, they ought to run Janet’s picture. When your passing inspires words fit for a poem, you know you’ve left a legacy. After describing Janet Odom as equal parts Mother Earth, Annie Oakley, pioneer and angel, one friend wrote this: “You can feel her on your bare shoulders where the summer sun warms you. You can feel her in the beat of the music you feel reverberating in your body. You can taste her when you sit down among friends and share cocktails. You can hear her in the laughs after the well told and possibly inappropriate joke. Early this morning there was a seismic shift in gravity. I’m not really sure how this world operates without Janet in it.” A gift in her memory can be made to Clemson University Foundation, College of Agriculture, Forestry & Life Sciences General Annual Scholarship. How she loved cheering on her Tigers. Call (864) 656-5896 or write Clemson University Foundation Annual Giving Office, P.O. Box 1889, Clemson, S.C. 29633. Put “In memory of “Janet S. Odom” on the memo line. You can also give at www.iamatiger.clemson.edu. Or a gift in Janet’s memory can be made to donations may be made to Toccoa Falls College. Please note that your gift is in memory of Janet Odom. Online gifts can be given at www.tfc.edu/giving. Checks can be mailed to Toccoa Falls College, 107 Kincaid Drive, MSC 809, Toccoa Falls, GA 30598. A service to celebrate her life will be at 4 p.m. Friday, Feb. 18, at Shives Funeral Home, 7600 Trenholm Road, Columbia, S.C. Visitation will be from 2:30 to 4 p.m. Shives Funeral Home is taking care of the family. Online condolences can be shared at www.shivesfuneralhome.com.

Janet Odom did not lose a moment of life to boredom. She was a cheerleader, beauty queen, pilot, hospital board member for 18 years including chair, and big game hunter, though not all at the same time, at least as far as the family knows.... View Obituary & Service Information

The family of Mrs. Janet Sellers Odom created this Life Tributes page to make it easy to share your memories.

Janet Odom did not lose a moment of life to boredom.

Send flowers to the Odom family.