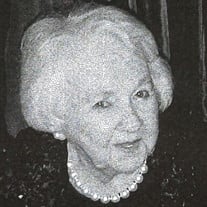 Janette “Jan” Guerry Moore, 87, of West Columbia, SC, died on February 20, 2021 after a brief illness. Born August 11, 1933 in Charleston, South Carolina, she was a daughter of the late John Everett Guerry and Frances Cole Guerry. Mrs. Moore was the wife of 51 years to the late Matthew Singleton Moore, II. She was a devoted wife, mother, and a friend to many. She was a faithful and active member of Trinity Episcopal Cathedral, Columbia, South Carolina, where she was a frequent volunteer for church functions and different outreach ministries provided by the church. Mrs. Moore was a member of the Order of the Daughters of the King, St. Martins’ Chapter, and a member of the Huguenot Society of South Carolina. Mrs. Moore had a wide circle of longtime friends in all places where she has lived over the years, including many childhood friends with whom she grew up in Mount Pleasant, friends in Kilgore, Texas where she and the late Mr. Moore lived for many years, friends in Columbia, South Carolina where they lived after retirement and particularly at Still Hopes Retirement Community where she cherished friendships with many residents and staff members. She stayed in close touch with many friends until her passing. As a resident of Still Hopes Retirement Community she was a member of the Women’s Chorus, served a term on the Residents’ Council (Chair, Social Committee) was a frequent organizer of informal social gatherings and a Founding Member and past Chairwoman of the Five O’clock Club. All that knew her loved her and sought her out for her uplifting positive spirit. She is survived by her son, Matthew S. Moore, III and daughter-in-law Lisa of Mount Pleasant, South Carolina; grandson Matthew S. Moore IV and wife Rachel of Columbia, South Carolina; brother William LeGrand Guerry of Mt. Pleasant, South Carolina; and sister, Ruth Anne Guerry Woods of Yemassee, South Carolina; along with numerous nieces; and nephews. In addition to her parents, and husband, Mrs. Moore was preceded in death by brothers, John Everet Guerry Jr., Jon LeRoy Guerry; and half- brothers, Lewis Everet Walters, and Cole Douglas Walters. At her request, along with concerns with Covid, a celebration of Jan’s life will be held at a later date. Shives Funeral Home, Trenholm Road Chapel, is assisting the family. In lieu of flowers, memorials can be made to Trinity Episcopal Cathedral General Fund, 1100 Sumter, St., Columbia, SC, 29201; Still Hopes Retirement Community Residence Assistance Fund, 1 Still Hopes Dr., West Columbia, SC, 29169; the American Lung Association, 55 W. Wacker Dr., Ste. #1150, Chicago, IL, 60601; or the Alzheimer’s Association, 140Stoneridge Dr., #210, Columbia, SC, 29210.

The family of Mrs. Janette G. Moore created this Life Tributes page to make it easy to share your memories.