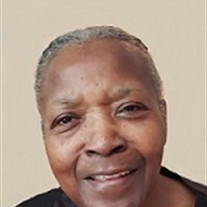 SFC Janie Lou Adamson, US Army (Ret.), affectionately known by her family as Anie, entered into rest March 13, 2022, she was 80 years young. She was born to the late Mr. Raymond Adamson, Sr., and the late Mrs. Ida Lou Adamson of Roanoke, AL. Janie accepted Christ at an early age and served faithfully and sang in the choir at Mount Pisgah Baptist Church in Roanoke, AL. Janie graduated from Randolph County Training School in 1959, and later joined the United States Army. She was a skilled Soldier, served as a Dental Hygienist, and was a graduate of Baylor University. She served this nation for 20 years and retired as a SFC at Fort Jackson in Columbia, SC, where she made her home, and later attended Midlands Technical College. To her family, she was a loving, kind, generous, supportive sister, and aunt, who will be greatly missed. Memories and her love for family and cooking shall be greatly remembered and treasured by all who knew her. She was preceded in death by her parents, Mr. Raymond Adamson, Sr., and the late Ida L. Adamson; brothers, Mr. James E. Adamson, Mr. Thomas Adamson, and Mr. Raymond Adamson, Jr.; and her sister, Mrs. Naomi Adamson Belle; and nephew, Weslyon Adamson, Sr. She leaves to cherish her loving memory Stephanie L. Thomas of Atlanta, GA; Stacey L. Belle of Landstuhl, Germany; Sonja L. Jackson of San Antonio, TX; Shirley L. Kelly of Newport News, VA; Victor Adamson of Las Vegas, NV; Gwen Adamson of Roanoke, AL; Sassar Adamson of Roanoke, AL; and a host of loving nieces, nephews, and friends. The family wished to express their most sincere appreciation for the kindness and expressions of sympathy extended during the time of illness and passing of our loved one. The funeral service for Ms. Janie, will be held at 11:30 o’clock, Tuesday, March 22, 2022, at Shives Funeral Home, Trenholm Road Chapel, with Pastor Robert Allen, Jr. from Grace and Truth Fellowship in Newport News, VA officiating. Burial will follow at 1 o’clock at Fort Jackson National Cemetery. The family will greet friends prior to the service beginning at 10:30 o’clock. A live stream of the service will be available by visiting her tribute page at ShivesFuneralHome.com.

The family of Ms. Janie Adamson created this Life Tributes page to make it easy to share your memories.

Send flowers to the Adamson family.