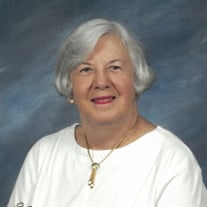 Jeanne Crawford Kean passed away on Sunday, June 13, 2021, at Still Hopes Episcopal Home in West Columbia, South Carolina. She was born in Columbia, on September 2, 1928, to Geddings Hardy Crawford and Jesse Thomson Crawford. She was a graduate of Columbia High School and Sweet Briar College. In the community, Jeanne served as chair of The United Way Advanced Gifts, President of The Historic Columbia Foundation, President of The Junior League of Columbia, Inc., Treasurer of The Hearing and Speech Center Board, and Chairman of the Historic Columbia Foundation Endowment Commission. She served on the board of the Red Cross, was President of the Friends of the Richland County Public Library, President of the Fortnightly Book Club, and was a member of the South Carolina Water Color Society. She was Vice-President of Gregg Development Co., a Broker with The Wolfe Company, served on The Fair Housing Committee of the Greater Columbia Realtors Assn., and was a member of The Future Group of Richland County - a strategic planning commission. Jeanne was a member of Trinity Episcopal Cathedral where she faithfully served her entire life in numerous capacities. For many years, she taught Sunday School and the Confirmation Class, was Finance Chair of the Vestry, served Sunday Breakfasts and helped serve lunch meals at Washington Street United Methodist Church to those in need in the community. She was a member of the Trinity Outreach Committee, was co-chair of the canvass, chaired the Wednesdays at Trinity Concert Series and was President of the Daughter's of the Holy Cross. On the Diocesan level, she was President of the Episcopal Church Women and was elected to serve on Bishop and Council as well as The Standing Committee. She served on the Board of Still Hopes where she chaired the Director Search Committee. Jeanne served on the Ministry to the Aging Commission, on the Cathedral College Board, chaired the Consecration Committee and was co-chair of the Bishop search Committee. She was also a delegate to Triennial and General Conventions and served as a long-time member of the Diocesan World Mission Committee and was chair of the Partnership Cange Endowments - one of her greatest joys! In addition to her numerous community, church, and Diocesan contributions, Jeanne was a talented writer and watercolorist. She was also a great story teller, was kind and gracious to all, and will be dearly missed by her family and many friends. She was predeceased by her parents, a sister, Louise Crawford Moorefield, a brother, Geddings Hardy Crawford, Jr., her son, William Madison (Matt) Kean and her daughter, Louise (Lisa) Crawford Kean. She is survived by grandchildren, Joshua Madison Kean, Sarah Kean Hall (Daniel), Brandon Miller Kean, two great-grandsons, Gideon and Samuel Hall, and her daughter-in-law, Mary Dale Morgan (Jaye)." Private Interment will be at Elmwood Cemetery. The memorial service for Jeanne will be held on Saturday, June 19, at 11:00 a.m., at Trinity Episcopal Cathedral, 1100 Sumter St., Columbia, SC 29201. Shives Funeral Home, Trenholm Road Chapel, is assisting the family. In lieu of flowers, memorials may be sent to the Episcopal Diocese of Upper South Carolina (payable to the Partnership Cange Endowment Fund), 1115 Marion St., Columbia, SC 29201.

Jeanne Crawford Kean passed away on Sunday, June 13, 2021, at Still Hopes Episcopal Home in West Columbia, South Carolina. She was born in Columbia, on September 2, 1928, to Geddings Hardy Crawford and Jesse Thomson Crawford. She was a graduate... View Obituary & Service Information

The family of Mrs. Jeanne Crawford Kean created this Life Tributes page to make it easy to share your memories.

Send flowers to the Kean family.