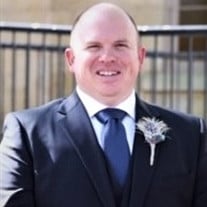 Jeffery Michael Keene, 39, of Lexington, KY, died Wednesday, October 28, 2020. Born August 1, 1981, in Deland, Florida, he is a son of Jeffery Wayne Keene and Lynn Marie Sposa Keene. Michael was a US Army combat veteran who honorably served his country for more than 12 years. During his enlistment, he was deployed for multiple tours in the Iraq Campaign and Afghanistan. Michael received multiple awards and commendations for his dedication to our country and was honorably discharged at the rank of Sergeant. He was currently employed as a Certified Audi Specialist in the service department for Audi of Lexington, Kentucky. Michael was born with a unique mechanical ability and developed a love for cars, especially Audi’s. This love influenced him to follow his dreams and become a mechanic following his military career. Michael also had a passion for firearms, routinely building and buying new guns to add to his collection. His greatest joy was his family as a devoted husband and father. Michael cherished every moment he had the opportunity to spend with them. Although Michael never viewed himself this way, his family would describe him as the glue that held everyone together. Michael’s friends describe him as the most loyal and honest friend a person could have. To be considered a friend was special and he thought of you as family. His memory will be deeply cherished by everyone who had the opportunity to know him. In addition to his parents, Michael is survived by his loving wife, Nicole Dawn Leber Keene; children, Adalynn Keene and Michael Wesson Keene; brother, William Joseph Keene (Emily); sisters, Jennifer Keene Scoggins (Scotty) and Kelly Keene Auwaerter (Travis); nieces and nephews, Carmine Keene, Brody Keene, Sloane Scoggins, Sig Scoggins, Stellan Scoggins, Amelia Auwaerter, and Barrett Auwaerter; maternal grandparents, Bill and Marie Sposa; as well as his mother-in-law, Peggy Caldiero and numerous other family members that admired Michael. He was preceded in death by his paternal grandparents, James E. Keene, Jr. and Jennie Fussell; and his father-in-law, Marc Liberacki. The funeral service for Michael will be held 12:30 o'clock, Monday, November 16th, at Shives Funeral Home, Trenholm Road Chapel, 7600 Trenholm Road Ext., Columbia. The family will briefly receive friends following the service. The burial with military honors will follow at 2 o’clock in Fort Jackson National Cemetery. For those unable to attend, a livestream of the funeral service will be available by visiting his tribute page at ShivesFuneralHome.com. Everyone is invited to attend but will be asked to abide by the state’s recommendations of wearing masks and social distancing to provide a safe environment for all. In lieu of flowers, memorials may be sent to The Gary Sinise Foundation or Tunnel To Towers Foundation.

The family of Mr. Jeffery Michael Keene created this Life Tributes page to make it easy to share your memories.

Send flowers to the Keene family.