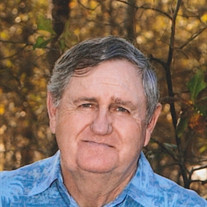 Jimmy Legrand Raines, 76, of Blythewood, died, Friday, July 3, 2020. Born in Blythewood, SC, on September 21, 1943, he was a son of the late Ernest E. and Mary Ellen “Polly” Mattox Raines. Jimmy graduated from Blythewood High School where he played varsity basketball, baseball and ran track. In March of 1968, he was drafted into the United States Army and was sent to Vietnam in December 1968. Following his service, he worked as a certified electrician for Seastrunk Electric Company before retiring from South Carolina Department of Disabilities and Special Needs. Jimmy coached his sons in little league baseball several years and routinely attended their games. In his free time, Jimmy was passionate about fishing and hunting. One of the highlights of his life was attending the 2017 football game when Clemson beat Alabama for the National Championship. Jimmy was sealed to his wife, Lynette Moore on December 5, 2012 at the Columbia SC Temple of The Church of Jesus Christ of Latter-Day Saints. Survivors include his beloved wife of 55 years, Lynette Moore Raines; sons, Jim Raines (Cristine) and Kevin Raines (Nancy); grandchildren, Ashton Wedel (Derek), Jessica Raines, Lauren Raines, Hannah Raines and Matthew Raines; a sister, Mary Ellen Raines Doble; a brother-in-law, T. Edward Cooper; as well as numerous nieces, nephews and extended family members. In addition to his parents, he is preceded in death by his sister, Jacqueline “Jackie” Raines Cooper; and a brother, William “Billy” E. Raines. The graveside service for Mr. Raines will be held 3:30 o’clock, Monday, July 6th at Centerville Cemetery, Centerville Road, Ridgeway. In light of the COVID-19 pandemic, those unable to attend the service may view the livestream at ShivesFuneralHome.com and by visiting his tribute page. Serving as pallbearers will be Michael Raines, Brian Raines, Brad Moore, John Zenoni, Dean Kunkle, and Terrell Aultman. A special thank you is extended to his “godsent” caregiver, Betty Duncan; as well as Pruitt Health Hospice for their unwavering love, care and support. Memorials may be made to Humanitarian or Missionary Fund of The Church of Jesus Christ of Latter-day Saints, 1391 State Rd S-20-67, Ridgeway, SC 29130.

The family of Mr. Jimmy L Raines created this Life Tributes page to make it easy to share your memories.

Send flowers to the Raines family.