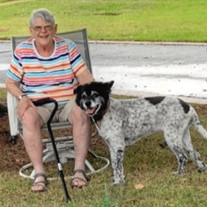 JoAnn Dotschkal Reiff, 87, of Columbia, SC, former lifetime resident of Souderton, PA, died Tuesday, December 21, 2021. Born September 14, 1934, in Sellersville, PA, she was the daughter of the late Violet and stepdaughter of Ralph Groff. JoAnn was the loving wife to William “Bill” Reiff for 66 years. The two had a home in the Poconos, where they went every weekend for 30 years enjoying fishing, visiting best friends, and playing bingo at Albrightsville Fire Co. She was a lover of all animals and didn’t meet a furry stranger. She loved to laugh, play games and cards. Mrs. Reiff graduated from Souderton High School in 1953 where she was a cheerleader, played hockey and basketball. As newlyweds, they moved to Missouri for two years while Bill was in the Army. Upon returning to Souderton, she was a proud resident and even acted as their Easter Bunny in town for many years in the early 1970s. JoAnn was a member of the Red Hat Society at Generations of Indian Valley. Early in life, she was a stay-at-home mom, working part-time jobs in the home. JoAnn was later employed at Emico in Dublin and Porter Instrument in Hatfield. In addition to her husband, Bill, she is survived by daughter, Paulette Price (Tom) of Columbia; grandchildren, Jenny Curran, Allison Price, Ashlee Huttenlocker, and great-granddaughter, Hannah Curran, all of Columbia; brother, Charles (Betty) of Nevis, MN; and many loving nieces and nephews. Along with her parents, she is preceded in death by her birth father, Paul, and sister, Shirley. Memorials can be made to Bethel United Methodist Church, Todd Lutz Scholarship Fund, 4600 Daniel Drive, Columbia, SC 29206 or Souderton Fire Co., 266 N. 2nd Street, Souderton, PA 18964. Shives Funeral Home, Trenholm Road Chapel is assisting the family. She will be laid to rest in Pennsylvania at a later date.

The family of Mrs. JoAnn Dotschkal Reiff created this Life Tributes page to make it easy to share your memories.

Send flowers to the Reiff family.