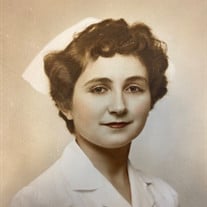 Joann Elizabeth Burke Follis, 90, of Columbia, died Tuesday, January 26, 2021. Born October 17, 1930 in St. Louis, Missouri, she was a daughter of the late Edward and Helen Kinyon Burke. Raised in St. Louis, Mrs. Follis converted to Catholicism at age 12 and graduated from Incarnate Word High School. She then attended Barnes Jewish Hospital School of Nursing, where she earned her degree in nursing in 1952. While working on her education, Mrs. Follis put herself through college while working as a clerk for a typing pool. Mrs. Follis then joined the US Navy and honorably served her country for 10 years. During her enlistment, she was in the Nursing Corps during the Korean War. Mrs. Follis retired with over five decades of service in the healthcare community. Mrs. Follis was a devout Catholic and member of St. John Neumann Catholic Church. She was very active in church activities and was the former director of the Altar Guild. Mrs. Follis loved politics and could not stand liberals. One of her favorite pastimes was listening to the Rush Limbaugh show. In 1955, she married Lawrence Edward Follis and they shared more than 65 years together. They raised three daughters, Frances Ann Cecilia Follis of Columbia, Catherine Kinyon Follis House (Dan) of Dekalb, IL, and Claire Follis (David F. Renfro) of Coralville, IA. Mrs. Follis was a proud grandmother to Lindsey and Joe House. In addition to her parents, she was preceded in death by her sister, Sandra Beard. A mass of Christian burial will be held 12 o’clock Monday, February 1st at St. John Neumann Catholic Church, 100 Polo Rd, Columbia, SC with Father Alexander McDonald officiating. Commendation and farewell prayers will follow at St. Peter’s Catholic Cemetery, 511 Elmwood Ave Columbia, SC 29201. Shives Funeral Home, Trenholm Road Chapel, 7600 Trenholm Road Ext, Columbia, SC, is assisting the family. Everyone is invited to attend but will be asked to abide by the state’s recommendations of wearing masks and social distancing to provide a safe environment for all. A livestream of Mrs. Follis’s service will be available by visiting her tribute page at ShivesFuneralHome.com. In lieu of flowers, memorials may be made to Priests for Life, PO Box 236695, Cocoa, FL 32923.

The family of Mrs. Joann Elizabeth Follis created this Life Tributes page to make it easy to share your memories.

Send flowers to the Follis family.