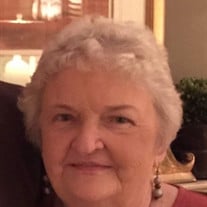 Joanne McBride Rawson, of Davidson, NC, died surrounded by the love of family and friends, on July 29th, 2020. She was born December 26, 1935 in Vidette, GA. She was the daughter of the late Thomas Gardiner McBride and Letitia Sheppard McBride. She was Joanne to her friends, Jo to her brothers and sisters (she was the youngest of 9), and JoJo to her beloved and devoted grandsons. A graveside service for the family will be held in the Memorial Garden at Eastminster Presbyterian Church in Columbia, SC, where she was a devoted member for many years. The service will be officiated by the Rev. Dr. Bradley D. Smith, Senior Pastor. Shives Funeral Home, Trenholm Road Chapel is assisting the family. After graduation from Graniteville High School in Graniteville, SC, she attended the Medical College of Georgia in Augusta, GA completing her training as a Registered Nurse. During a time in which there were few professional opportunities for women she committed herself to furthering her education and put herself through Vanderbilt University graduating with a B.S. in Nursing and a minor in English. Well-founded rumor is that she never made a single “B”. It was at Vanderbilt on the porch at Rand Hall that she met the love of her life, William Sherard “Bill” Rawson. The two wed at Reid Memorial Presbyterian Church in Augusta, GA in September of 1964. She was an instructor in Clinical Nursing at the Williams Brice College of Nursing at the University of South Carolina; during her time teaching at USC she earned a Masters in Public Health, one of the first graduates of the Arnold School of Public Health. After leaving USC she enjoyed a successful career in Home Health and in the Insurance field, retiring when work got in the way of her life calling – she didn’t want to miss a minute of time with family, embracing with passion her role as grandmother. She served as a Ruling Elder at Eastminster Presbyterian Church in Columbia, SC. There was seldom a Sunday that she was absent from Sunday school and church. But the greatest joy of her life was being a grandmother. One of the happiest days of her life was when she greeted her second grandson and learned that his given name, McBride, was her maiden name. If you knew Joanne you knew of her grandsons and she was more than happy to recount for you everything that they were doing. She hosted many summer sessions of “Camp JoJo” – known to others as McKillop Basketball Camp at Davidson, but to her grandsons and their friends as Camp JoJo. She was blessed to enjoy more than a decade living her best years at The Pines in Davidson, where she honed her bridge skills, took great joy in selecting movies to show on Saturdays and was thought of by many as the mayor of this special community. She was predeceased by 14 days by her loving husband of 55 years, William Sherard Rawson, by her brothers, T.G., Maynard, and Henry, and by her sisters, Frances, Susie, Carrie, and Ruth. She is survived by a sister, Ouida Malon of Colonial Heights, VA; her daughter, Sherard Anne Rawson Gates of Charlotte, NC and her husband Tilman Thomas Gates; her son, William Stewart Rawson of Columbia, SC and his wife Pamela Plowden Rawson; and her devoted grandsons: William Timothy Rawson of Atlanta, GA, McBride Kauders Rawson of Charlottesville, VA, Tilman Thomas Gates, Jr. of Charlotte, NC, and William Rawson Gates of Charlotte, NC. The family wishes to thank Lauren Uxa and Ruth Exis of Novant Health Presbyterian Medical Center in Charlotte, NC for the love and care that they showed her at the end of her life. Memorials may be sent to The Pines in Davidson, NC.

Joanne McBride Rawson, of Davidson, NC, died surrounded by the love of family and friends, on July 29th, 2020. She was born December 26, 1935 in Vidette, GA. She was the daughter of the late Thomas Gardiner McBride and Letitia Sheppard McBride.... View Obituary & Service Information

The family of Joanne McBride Rawson created this Life Tributes page to make it easy to share your memories.

Joanne McBride Rawson, of Davidson, NC, died surrounded by the...

Send flowers to the Rawson family.