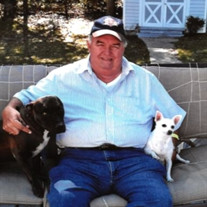 Johnny W Banks, 71, of Columbia, SC, passed away On Saturday August 28, 2021. Born in Columbia, SC, on March 28, 1950, he was the son of Wenonah Mckinney Banks and John Wallace Banks. Johnny graduated from Dentsville High School in 1968. He worked as a field engineer for Recognition/Banctec repairing and maintaining banking machines at South Carolina National Bank and for several years statewide before retiring. He also operated Columbia Microwave for many years and always believed in working more than one job at a time. He never met a stranger, and his favorite part of work was all the people he met and friends he made. He loved antique cars and trucks, trains and liked to be the first to get the latest gadgets. Johnny was a jack of all trades and could figure out ways to fix almost anything, he could build a home addition and fix almost any appliance or small engine and he loved to help others with advice or assistance on their projects. Johnny encouraged his children to follow their dreams but to always have fun. He was a big kid at heart and was devoted to making his kids and grandkids’ childhood magical whether he was making a train down the water slide, riding waves in the ocean, coaching soccer, serving as a cub scout leader, or dressing up as Santa Claus and handing out gifts and taking all the neighborhood children on hayrides at Christmas time. He never missed an opportunity to see his grandkids perform or play sports and was their biggest fan. Johnny was a huge Disney and Carolina Gamecocks fan and liked to try new things like snowmobiling across Yellowstone. He was a strong and determined person and when he set his mind to something he would not rest until he had found the right person and achieved it. He always found the good in everyone and loved it when everyone got along and was happy and would do everything in his power to make someone happy if they weren’t. Survivors include his wife of 51 years, Shirley Jennings Banks; children, Bobby Banks (Sherri), Cynthia Banks Piper; grandchildren, Samantha Piper, Isabelle Piper; Daniel and Karen McCurry, great-grand daughter; Maddie, and sister; M. Faye Kelly (Charles). In addition to his parents, he is preceded in death by sister; Dorothy “Doff Ann” Galloway. A graveside service for Mr. Banks will be held at 10 o’clock on Thursday, September 2, 2021, at Crescent Hill Memorial Gardens, 2603 Two Notch Rd, Columbia, SC 29204. The family will receive friends from 5 until 7 o’clock in the evening on Wednesday, September 1, 2021, at Shives Funeral Home, Trenholm Road Chapel, 7600 Trenholm Road Ext. Columbia, SC 29223. In lieu of flowers the family asks that you give a donation in Johnny’s name to the RMHC Ronald McDonald House in Charleston, SC or to PAALS Palmetto Animal assisted Life Services, both hold a special place in his heart.

Johnny W Banks, 71, of Columbia, SC, passed away On Saturday August 28, 2021. Born in Columbia, SC, on March 28, 1950, he was the son of Wenonah Mckinney Banks and John Wallace Banks. Johnny graduated from Dentsville High School in 1968.... View Obituary & Service Information

The family of Mr. John Wesley Banks created this Life Tributes page to make it easy to share your memories.

Send flowers to the Banks family.