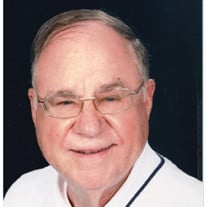 John G. Bannister passed away on December 29, 2020, at home surrounded by family. John was a kind, humble gentleman and a loving husband, father, grandfather and brother. He was born on August 29, 1935 in Minden, Louisiana to the late Gilbert Hartford and Lucille Pounds Bannister. John considered Portageville, Missouri home where he played on the Portageville High School football team until his senior year, when he moved to Memphis, Tennessee and graduated from Central High School. John earned his bachelor’s and master’s degrees from Memphis State University (now University of Memphis). He was a teacher, principal, and university administrator. He served as Director of Financial Aid at Memphis State University, Iowa State University and retired from the University of South Carolina. John was the first director of the Tennessee Student Assistance Corporation and taught many classes for the National Association of Student Financial Aid Administrators summer institute where he influenced many future financial aid administrators across the United States. He also served on the national board of the American College Testing program (ACT). In his early years, John served in the National Guard and Army Reserve. During his time in Columbia, he served on the Spring Valley homeowners board as a member and officer. Additionally, he served on the finance committee for St. David’s Episcopal church where he was a member and the finance committee for St. John Neumann Catholic church. He was a founding organizer of the University of South Carolina employee alumni group. John was a lifelong member of Sigma Chi Fraternity. John was an avid sports fan and supporter of University of Memphis and University of South Carolina. Additionally, he loved racquetball, bridge, walking, traveling, but more than anything time with his family and friends. He is survived by his wife of 60 years, Sarah Barnett Bannister and four daughters Lisa (Dick) Davis of Norfolk Virginia, Michelle (George) Kennedy and Beth Hawkins of Columbia, and Susan (Len) Douglas of Mount Pleasant. Six grandchildren, Richard Davis, Sarah Davis, Logan Kennedy, Sarah Kennedy, Savannah H. Seybold (Chase) and Winnie Hawkins. Brother-in-law, Jerry Felts (Florence, AL) and brother-in-law and sister-in-law Jack and Pat Barnett (St. Augustine, FL). He was preceded in death by his sisters Barbara (Babs) Felts and Clara Skelton. A special thanks to Halycon Hospice and family and dear friends. The funeral service for Mr. Bannister will be held at 2 o’clock, Saturday, January 2nd, at St. David’s Episcopal Church, with The Reverend William M. “Scotty” Brock officiating. Burial will follow the service in Greenlawn Memorial Park. The family will receive friends prior to the service at the church beginning at 1 o’clock. Shives Funeral Home, Trenholm Road Chapel, is assisting the family. Mask and social distancing are required. A livestream of the service will be available by visiting his tribute page at ShivesFuneralHome.com Memorials may be made to St. David’s Episcopal Church, 605 Polo Road, Columbia, SC 29223.

John G. Bannister passed away on December 29, 2020, at home surrounded by family. John was a kind, humble gentleman and a loving husband, father, grandfather and brother. He was born on August 29, 1935 in Minden, Louisiana to the late Gilbert... View Obituary & Service Information

The family of Mr. John G. Bannister created this Life Tributes page to make it easy to share your memories.

Send flowers to the Bannister family.