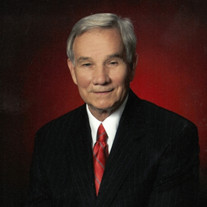 During this time of Thanksgiving and Grace, we announce that our beloved husband, father, grandfather and friend, John B. Coleman, 81, of Columbia, passed into his eternal home on Thanksgiving Day. John was born on September 10, 1940, in Leesburg, FL. John was the oldest of three children and the only son of the late Ben Bartow Coleman and Effie Fort Coleman. He spent his formative years growing up in Wildwood, FL where he loved to hunt, fish and developed his passion for Florida Gator football. John graduated from Wildwood High School in Wildwood, FL in 1958, where he was a star and record setting athlete in football and track. He was also the high school class president and was later inducted into the Wildwood High School Hall of Fame. He attended The University of Southern Mississippi where he continued to play football for four years. He earned a Bachelor’s of Science in Business. He served his Country as a Sergeant in the United States Army Reserves. John devoted over 52 years of his working career to the care of State Farm customers and friends. During his time with State Farm, he earned numerous awards and recognition for achievements at the highest levels. In addition to his accomplishments at State Farm, John served his community in many ways over his lifetime. He served as President of the Pensacola Jaycees, coached little league football, was longtime member and past President of The Forest Acres Rotary Club of Columbia, SC, served as a member of the Richland County Public Library Board, was a 36 year member of First Baptist Church of Columbia where he served several terms as a Deacon and was an active member of the Bible Survey Sunday School Class. He was appointed to serve as the Finance Chairman for the Church. John and his wife, Amy, were married for 56 years. They were true soul mates and those around them knew how deeply they loved one another. They spent their time and interests frequently traveling. While most of the recent travels have been to their favorite locations of Cashiers, NC and Charleston SC, over their lives together they were fortunate enough to visit multiple countries. John had dual loves of the mountains and a beautiful coastal sunset. One of his greatest joys was to spend time with his two beautiful granddaughters Ella Ryals and Kate. John is preceded in death by his parents, Ben Bartow Coleman and Effie Fort Coleman, and his sister, Betty Coleman Johnson all from Wildwood, FL. Survivors include his wife, Amy Ryals Coleman; son, Chase Coleman (Katie); grandchildren Ella Ryals and Kate; sister, Jean Coleman Symonds; as well as several nieces and one nephew. The family wishes to extend the utmost gratitude to our dear friend Janice Kennedy for the many years of dedication, friendship and love that she showed John and our entire family. The funeral service for John will be held at 3 o’clock in the afternoon, Thursday, December 2nd, in the Boyce Chapel of First Baptist Church, 1306 Hampton St, Columbia, SC 29201. The Rev. Dr. Wendell Estep and the Rev. Richard Humphries will officiate. The family will receive friends prior to the service beginning at 2 o’clock in the Parlor of First Baptist Church. Shives Funeral Home, Trenholm Road Chapel, is assisting the family. Memorial donations may be made to The Samaritans Purse; or to the First Baptist Church Media Ministry.

During this time of Thanksgiving and Grace, we announce that our beloved husband, father, grandfather and friend, John B. Coleman, 81, of Columbia, passed into his eternal home on Thanksgiving Day. John was born on September 10, 1940, in... View Obituary & Service Information

The family of Mr. John B. Coleman created this Life Tributes page to make it easy to share your memories.

During this time of Thanksgiving and Grace, we announce that...

Send flowers to the Coleman family.