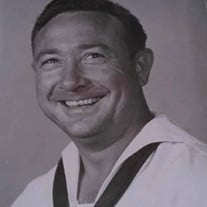 John Dinnis King, 97, long-time resident of Blythewood, SC, died at home Monday, August 30th, 2021, with his oldest son by his side. John was born April 6th, 1924, in Laurinburg, NC to the late Pearl and James King. He had three brothers and three sisters. Not long after losing his mother as a young teen, John enlisted in the US Navy and proudly served during WWII and the Korean War. After retiring from the Navy, John joined NOAA as a shift supervisor, processing and developing film taken via satellite of the earth, which appeared on the local news weather forecast, until he retired in 1982. John was fortunate to have had two loves in his life and is predeceased by his first wife of 52 years, Ethel King and by his second wife of 10 years, Mary King. He was the patriarch of the King family and is survived by his eight children; Ernest King, Elsie Inzer (Gerry), Denise Sampsel (Pete), Robert King (Laura), Tina Peeples (Theodore), Christine Caillouet (Kevin), Sidney King (Darlene) and Billy King; 24 grandchildren; and 18 great-grandchildren. In addition to his parents, and wives, he was preceded in death by his daughter-in-law, Phyllis. He was a Christian with strong faith. God, country, and family were his top priorities. John and his first wife, Ethel, also fostered over 54 children. He had an open-door policy in his home; if anyone needed a place to stay, there was always room in his house and food on the table. His positive attitude, generosity and charming personality will be greatly missed by family and friends. The funeral service for Mr. King will be held at 11:30 o’clock, Friday, September 10, 2021, at Sandy Level Baptist Church. Burial will follow in the church cemetery. A viewing and visitation will be held prior to the service at the church beginning at 10:00 o’clock. Shives Funeral Home, Trenholm Road Chapel, is assisting the family. All are welcome to attend; however, masks and social distancing practices are encouraged to maintain a safe environment for all. A livestream may be viewed by visiting his tribute page at ShivesFuneralHome.com. In lieu of flowers, memorials may be made to John King’s favorite charity, St. Jude Children’s Research Hospital, 501 St. Jude Place, Memphis, TN, 38105.

John Dinnis King, 97, long-time resident of Blythewood, SC, died at home Monday, August 30th, 2021, with his oldest son by his side. John was born April 6th, 1924, in Laurinburg, NC to the late Pearl and James King. He had three brothers... View Obituary & Service Information

The family of Mr. John Dinnis King created this Life Tributes page to make it easy to share your memories.

Send flowers to the King family.