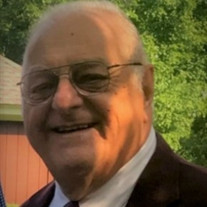 Not sure what to send?

John Allen Mower, III, 79, of West Columbia, entered into eternal peace and rest with his Lord and Savior on Saturday, May 14, 2022. Born August 17, 1942, in Pottsville, Pennsylvania, he was the son of the late John Allen Mower, Jr. and Kathryn Boyer Mower. John attended Schuylkill County, Pennsylvania public schools and graduated in 1964 from Blue Mountain High School. He attended Catawba College in Salisbury, North Carolina where he earned his bachelor’s degree with a major in Religion and a minor in Music. It was at Catawba College that he met Joyce Pittman and they were married in summer of 1963. They then moved to Fort Worth, Texas and enrolled in Southwestern Baptist Theological Seminary, where John continued his post-bachelor’s studies in Theology. While in seminary he was youth director at two different churches in the Fort Worth area. In 1968, Rev. Mower relocated to Columbia, SC and served as associate pastor and youth minister at Jackson Creek Baptist Church. He was later called to be pastor there. From 1975-1978 he was the associate pastor and minister of music at Grace Chapel Community Church in Dixiana. For nearly 44 years, John served the congregation of Forest Lake Bible Church as pastor until his homegoing. Throughout his years of ministry, he emphasized discipleship. He was involved in training counselors for several Columbia-area evangelistic crusades and taught many discipleship seminars. In addition, one of his greatest joys was ministering to staff and campers at Ambassador Camp in Lake Waccamaw, North Carolina. For more than 40 years, "Uncle Big John" looked forward to training camp staff, serving as camp pastor one week each summer, and was on the current board of directors. John lived an active life as an avid cyclist and worked persistently to keep his body going. He enjoyed many years playing and refereeing softball. He was also a faithful participant in the Richland County and Lexington County Senior Games. He loved meeting new people and cheering others on in good sportsmanship. As long as he was able, he enjoyed hunting, fishing, grass cutting, and woodturning pens. In his later years, John enjoyed reading several biographies and books by Christian authors that he found to be helpful and challenging in His own walk with the Lord. He found much comfort and encouragement through his great appreciation for music. Survivors include his wife of 59 years, Joyce Pittman Mower; children, Joanna Elizabeth Mower of West Columbia and John Allen Mower, IV of West Columbia; two grandchildren whom he dearly loved, John Allen Mower, V and Grace Elizabeth Mower; as well as sister, Lois Mower Lis of Douglassville, Pennsylvania. He is also survived by numerous extended family members in Pennsylvania and Canada. In addition to his parents, he was preceded in death by his stepmother, Sara Long Mower and sister, Jean Mower Millar. The funeral service for Mr. Mower will be held at 4 o’clock, Friday, May 20th at Shives Funeral Home, Trenholm Road Chapel, 7600 Trenholm Road Ext., Columbia, SC. The family will receive friends prior to the funeral beginning at 3 o’clock. A livestream of Mr. Mower’s funeral will be available by visiting his tribute page at ShivesFuneralHome.com. A private burial will be held at a later date at Rowan Memorial Cemetery in Salisbury, North Carolina. Memorials may be sent to Forest Lake Bible Church c/o 1806 Fairhaven Dr, Columbia, SC 29210 or Ambassador Camp, PO Box 200, Lake Waccamaw, NC 28450. The family would like to express their deepest thanks to the team of medical and healthcare professionals who gave care and treatment to him over these last years. He always felt blessed to have such good caregivers.

John Allen Mower, III, 79, of West Columbia, entered into eternal peace and rest with his Lord and Savior on Saturday, May 14, 2022. Born August 17, 1942, in Pottsville, Pennsylvania, he was the son of the late John Allen Mower, Jr. and Kathryn... View Obituary & Service Information

The family of Mr. John Allen Mower, III created this Life Tributes page to make it easy to share your memories.