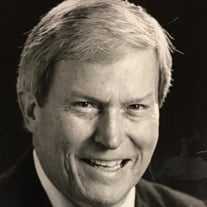 John Cecil Murphy passed away peacefully at his home on Sunday, November 14, 2021. He was born May 12, 1929 in New Martinsville, West Virginia to Cecil Robert Murphy and Evelyn Pyles Murphy. John was raised in Bridgeport, West Virginia starring in football, basketball and baseball at Bridgeport High School. He was recruited by the likes of General Robert Neyland and Paul “Bear” Bryant but chose to play football at West Virginia University. In addition to his athletic prowess, he received the Benedum Scholarship to WVU based upon his academic achievement, leadership and character. He played on the 1949 Sun Bowl Championship Team and also played one season of baseball and ran for the varsity track team as a senior. While a student at WVU, John was also a member of Beta Theta Pi Fraternity, Army ROTC and Mountain, a prestigious university Honor Society. Upon graduation he was commissioned as a Second Lieutenant in the United States Army and served in the Korean Conflict. He was awarded the Bronze Star for valor in combat and promoted to First Lieutenant before returning stateside. He ultimately obtained the rank of Captain while serving in the Reserves. He obtained a Master’s Degree in Education from WVU in 1954 and was named Head Football Coach at his alma mater, Bridgeport High School. He led the Indians to the 1955 Class A State Championship, the first of more than ten championships the school has won. He was inducted into the Bridgeport High School Hall of Fame in 2013. In 1956, he left the high school coaching ranks to accept a position on Jim Tatum’s staff at the University of North Carolina while simultaneously attending law school (and meeting and marrying his wife of 62 years). After receiving his law degree in 1959, he became a Special Agent with the Federal Bureau of Investigation. During his 25 year career with the FBI, he served as a field agent and also as instructor of defense tactics for new agent training at the FBI Academy in Quantico, Virginia. After retiring from the Bureau while working in the Columbia field office in 1984, he worked for 10 years as a legal instructor at the South Carolina Criminal Justice Academy, retiring for good in 1994. Mr. Murphy was an avid golfer and sports enthusiast known for his keen intellect, kind demeanor, quick wit and memorable one liners. He was regarded as a consummate gentleman by everyone who knew him. He was a member of Shandon Baptist Church. Mr. Murphy is survived by his wife of 62 years, Marianne Salyer Murphy; his children, Erin Jane Murphy of Columbia, John Robert Murphy (Aimee) of Columbia and Christopher William Murphy (Callie) of Columbia; known as “Watashi” to his grandchildren, Melissa Murphy Crowson (Erich), John DuBose Murphy (Dylan), William Butler Murphy, Keegan Carolina Murphy, William Justice Murphy and Hawk Christopher Murphy; great-grandchildren, Timothy Beaux Crowson, Baby Girl Crowson (due any day!) and John Caulder Murphy. He was predeceased by his infant son, Mark Murphy; sister, Mary Keturah “Kay” Murphy Smith and James Robert “Bob” Murphy. The family would like to extend their sincere gratitude to the Hospice nurses and caregivers including Meesha Spence, Raymond Herring and Bridget Jackson-Sydnor. In lieu of flowers, the family asks that donations be made to the Wounded Warrior Project or a charity of one’s choice. A memorial service will be held at 10:00 a.m. on Thursday, November 18, 2021 at Shives Funeral Home, Trenholm Road Chapel, 7600 Trenholm Road Ext., Columbia. A graveside service with Military Honors will also be held on Thursday, November 18, 2021 at Fort Jackson National Cemetery for immediate family. A livestream of the memorial service will be available at ShivesFuneralHome.com.

The family of Mr. John Cecil Murphy created this Life Tributes page to make it easy to share your memories.

John Cecil Murphy passed away peacefully at his home on Sunday,...

Send flowers to the Murphy family.