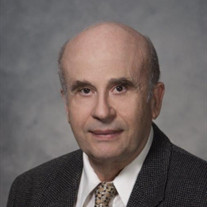 Dr. Joseph Roberts, 84, passed away on Wednesday, July 22, 2020 after courageously battling a long and debilitating illness. Born on May 24, 1936, in Bardejov, Czechoslovakia, he survived the concentration camps of the Holocaust and was orphaned at a young age. He faced many challenging times, sustained and spurred by the belief that his life had been spared so that he could accomplish goals of lasting value. Dr. Roberts earned his doctorate in biochemistry at McGill University in Canada and completed postdoctoral training in enzymology at Johns Hopkins University. He was named Scholar of the Leukemia Society of America and later received a Research Career Development Award from the National Cancer Institute. Dr. Roberts held professorships at leading universities and research institutions, including Baylor University in Dallas, Texas, and the University of Washington, in Seattle, Washington. Subsequently, he was Director of the Laboratory of Experimental Enzyme Therapy at the Sloan-Kettering Institute for Cancer Research in New York and Associate Professor of Biochemistry and Pharmacology at Cornell University. For the last 20 years of his career, he was a research professor in the pharmacy school at the University of South Carolina, retiring as a Distinguished Professor Emeritus. He was an exacting teacher, urging his students to think rather than memorize, something they thanked him for years later when they re-introduced themselves during chance meetings all over town. Dr. Roberts accomplishments include over 100 scientific publications, book chapters, and several patents, as well as numerous awards and accolades. He was an early pioneer in the therapeutic use of enzymes as drugs to treat cancer and viral diseases. His work on the enzyme, asparaginase, led to the first successful treatment for childhood leukemia and was recognized by Time magazine in 1967 as one of the top 10 inventions of the decade. Dr. Roberts took great pride in his children, happily telling and re-telling family and close friends about their antics as little kids and their achievements as adults. Always ready to help, he encouraged his children to set high goals and work hard to attain them. Dr. Roberts loved to talk shop and compare deals with his watch and camera buddies. He had strong opinions which he freely expressed and enjoyed debating current events. Dr. Roberts was a proud man with strong moral values and a tenacious spirit, devoted to his work and, especially, to his family. He will be sadly missed by Julie, his loving wife of 55 years, as well as by his children, Lori Davis (Joel) and Jeffrey Roberts (Melanie) and by his much adored grandchild, Nicholas Roberts. Dr. Roberts is survived by his sister, Lia Besunder (Marvin) of Toronto, Canada; brother, Andor Roberts (Ilona) of Toronto, Canada, and many nieces and nephews. He is predeceased by sisters, Eva Rosenwasser, Edith Rosenwasser, Magda Horvath (Frank), Valerie Rohan (Emanuel) and brother Dr. Mark Roberts (Barbara). Donations honoring Dr. Roberts memory may be made to the American Cancer Society or to the charity of your choice. A private graveside service will be held with immediate family at Hebrew Benevolent Society Cemetery. Shives Funeral Home, Trenholm Road Chapel, is assisting the family.

Dr. Joseph Roberts, 84, passed away on Wednesday, July 22, 2020 after courageously battling a long and debilitating illness. Born on May 24, 1936, in Bardejov, Czechoslovakia, he survived the concentration camps of the Holocaust and was orphaned... View Obituary & Service Information

The family of Dr. Joseph Roberts created this Life Tributes page to make it easy to share your memories.

Send flowers to the Roberts family.