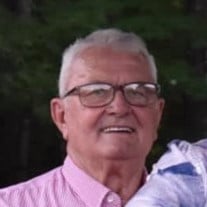 Joseph Nathan Trapp, Sr., 78, of Blythewood, died on Sunday, August 1, 2021. Born December 6, 1942, in Blythewood, he was the only son of the late Thomas Marion Trapp and Nannie Eloise Branham Trapp. Mr. Trapp was an active member of the Blythewood Ward of the Church of Jesus Christ of Latter-day Saints. He and Martha Ann began their marriage with humble beginnings and with absolutely nothing. Through faith in the Lord Jesus Christ and devotion to the Church of Jesus Christ of Latter-day Saints, he honored his covenants. From that humble beginning, he and Martha Ann created a legacy that will be noticed throughout the eternities. He was a hard worker. If hard work was a recipe for success, he would be the most successful person around. He began his career as a meat cutter and eventually started two successful businesses, Red Knoll Landscaping and Joe Trapp’s Stone Ground yellow grits and cornmeal. He was a skilled woodworker and many of his wood projects could be found in the local BP in Blythewood. He didn’t fool around with the truth--he was honest with all of his fellow men. If you didn’t want to know the truth, don’t ask him. If he thought you needed him, he would make himself available anytime. When he was there and there were problems, you knew that everything was going to be all right. He didn’t meet a stranger and was well-loved by everyone he met. He enjoyed gardening and farming and always shared his harvest with everyone around him. He was a great storyteller. He was also a big time prankster and was always catching people up in his pranks involving dead snakes or shocking pens and lighters. In his later years, he planted a small vineyard and enjoyed pruning and harvesting grapes. He loved visiting with the people that came through the vineyard to pick and eat many pounds of grapes. He loved riding his golf cart around his beautiful property. He was the happiest when he was surrounded by his wife, children, and grandchildren. Joe is survived by his wife, high school sweetheart, and love of his life of almost 58 years, Martha Ann Branham Trapp; 4 children, Joey (Andrea) Trapp, Bill (Jennifer) Trapp, Shannon (Jamie) Benson, and Aubrey (Yadira) Trapp; 11 grandchildren, Wyatt (Thalia) Trapp, Hannah Trapp, Will Trapp, Brian Trapp, Eli Benson, Logan Trapp, Katie Benson, Nathan Trapp, Ginny Benson, Laura Lynn Benson, and Helen Trapp; 2 great-grandchildren, Luke and Camila; sisters Eloise Raines and Minnie Smith and brother-in-law Richard (Sybil) Branham; and many nieces and nephews. In addition to his parents, he was preceded in death by his sisters Beatrice Howard and Betty Belk along with sisters-in-law Adelle Mattox and Sarah Mae Campbell and brothers-in-law Charles Smith and John Raines. The funeral service for Mr. Trapp will be held at 5 o’clock, Wednesday, August 4, 2021 at The Church of Jesus Christ of Latter-day Saints, 1391 Centerville Road, Ridgeway, SC 29130. Burial will follow at the Centerville Cemetery. Visitation will be Tuesday, August 3, 2021 from 5-7pm at the Shives Funeral Home, Trenholm Road Chapel, 7600 Trenholm Road Ext., Columbia. Those who would like to pay their respects before the funeral may also do so prior to the funeral service starting at 4pm at the church. A livestream of the service may be seen by visiting ShivesFuneralHome.com. Pallbearers will be Wyatt Trapp, Will Trapp, Eli Benson, Nathan Trapp, Richard Branham Jr., Duane Mattox, Greg Belk, and Randy Wilson. Honorary pallbearers are Brian Trapp, Dean Branham, Jeff Branham, Tommy Belk, Randy Silvia, and Larry Thompson. The family would like to give special thanks to Dr. Scott Sommers and the staff at South Carolina Oncology Associates for all of their support over the past months. The family would also like to give a special thanks to family friends Harvey Cruzan and Susie Sommers for their love and support of Joe for many years. Memorials may be made to the Church of Jesus Christ of Latter-day Saints Blythewood Ward Missionary Fund.

Joseph Nathan Trapp, Sr., 78, of Blythewood, died on Sunday, August 1, 2021. Born December 6, 1942, in Blythewood, he was the only son of the late Thomas Marion Trapp and Nannie Eloise Branham Trapp. Mr. Trapp was an active member of the... View Obituary & Service Information

The family of Mr. Joseph Nathan Trapp, Sr. created this Life Tributes page to make it easy to share your memories.

Send flowers to the Trapp family.