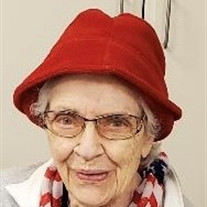 Life-long learner, devoted mother and grandmother, lover of the great outdoors, Josephine Hanna Breazeale Walker, 96, died on November 10, 2021 at Presbyterian Communities of South Carolina (PCSC), Columbia campus, after suffering a stroke in June. Born in Pickens, SC to Earley W. Breazeale and Irene Newton Breazeale on September 13, 1925, Josephine, or “Jo,” developed an early thirst for travel, reading Jack London’s The Call of the Wild in third grade in 1934 and dreaming of traveling to Alaska. A graduate of Pickens Senior High School, she attended North Greenville Junior College and earned an elementary education certification. An administrator, immediately impressed with Jo’s teaching, arranged for a scholarship to continue her education at Winthrop College, where she earned her bachelor’s degree. In 1953, Josephine joined three other female friends and fellow teachers on a cross-country road trip to the west coast and back, an adventure for which they received continuing education credits. In 1955, she married Greenville James Lynn Walker, Jr. (Jim) and they spent a month hiking in the mountains of Western North Carolina and exploring the Outer Banks before settling in Greenville. They moved to Columbia in 1968. She and Jim shared a mutual love of their faith, books, and opportunities to learn. Together, they raised three children, and traveled throughout the United States in their VW bus, often finding themselves in the midst of history-making events. Josephine had a 30+ year career as a public-school educator, most of which was spent at Seminole Road Elementary in Columbia (now William S. Sandel Elementary), where with several other teacher colleagues she pioneered the school’s Outdoor Classroom. She and Jim spent the early years of their retirement engaged in social justice and educational volunteerism, for much of which Josephine was the driving force, including their collaboration as adult literacy teachers, for which they earned the State Literacy Advocacy Award. Following Jim’s death in 1995, Josephine continued to volunteer in various capacities in the local and state Democratic Party, the League of Women Voters, the National Alliance on Mental Illness, and at her beloved church, College Place United Methodist. Jo’s home was always full of books and photos of places she had been and others she simply found awe inspiring. She could find beauty in the most mundane aspects of nature. She often would collect tiny blossoms that the unobservant would never notice and place them in miniature bottles she collected and then share them with neighbors and friends. At the age of seventy-five, having recently survived cancer for the second time, she hiked up Mt. Washington in New Hampshire, which she had climbed many times in the early 1950s as a counselor at Camp Waukeela in nearby Eaton, NH. She also especially enjoyed hiking “her” mountain, Mt. Jo, in the Adirondack Mountains of New York State. Around the same period of her life, to the surprise of all involved, she participated in a wild rafting adventure through Class IV rapids. She also spent considerable time in Alaska, which ironically became the home of her only grandchild, Roan, who lovingly bestowed the nickname “Hot Tea” on her in response to her gentle warnings to him of her cup of “hot tea!” as he toddled around. She spent her time in Alaska outdoors with him, tide pooling, playing in the trees, and “culvert hunting,” which involved indulging her little grandson in his fascination with finding all of the culverts going under the nearby roads. Josephine lived the last eleven years of her life at PCSC. Her family would like to thank the staff there for their care and their attention to her needs, especially as she became more dependent on assistance. Josephine is survived by her devoted children, Anna Reaves Walker of Edisto Beach, James L. Walker III (Jim) and his wife Jill of Lake Placid, NY, Sallie Rediske and her spouse, Dan, and son, Tyroan James Rediske (Roan), of Homer, Alaska; and her dear sister, Rose Hudson, of Ashford, Alabama. A celebration of life will be held at a future date to be determined. Shives Funeral Home, Trenholm Road Chapel, is assisting the family. In lieu of flowers the family requests that memorials be made to the Presbyterian Communities of South Carolina Employee Appreciation Fund and to Canoeing for Kids.

The family of Mrs. Josephine B. Walker created this Life Tributes page to make it easy to share your memories.

Life-long learner, devoted mother and grandmother, lover of the...

Send flowers to the Walker family.