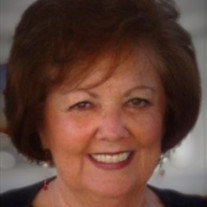 Judith Hall Damon, 82, of Columbia, died Monday, April 11, 2022. Mrs. Damon was a true coal miner’s daughter. She was born September 3, 1939, in a tenant mining home at Highland Creek Coal Company #20 in Whitman, West Virginia. She was one of four children of the late Herbert Harold Hall and Ardith Lawson Hall. Following elementary school, Mrs. Damon and her family moved from Whitman to Huntington, where she attended high school and later Marshall University. She later married George Peter Damon and they enjoyed 55 years of marriage, until his death on March 12, 2019. Mrs. Damon was a dedicated parishioner of Holy Trinity Greek Orthodox Church, where she was a member of the Greek Orthodox Ladies Philoptochos Society, as well as many other church groups. She was an avid golfer and a previous member of Spring Valley Country Club. A true family matriarch, her greatest accomplishment in life was being a devoted wife and mother. While her children were young, she volunteered her time being involved in their personal activities. Her children and grandchildren were the beneficiaries of Mrs. Damon’s love, support, and dynamic personality. Survivors include her daughters, Valerie Damon Coffey (Scott) of Fort Mill, SC and Michelle Damon Hogue (Michael) of Columbia; five grandchildren, Matthew, Robert, and Natalie Hogue, and Lilly and George Coffey; as well as her siblings, Patricia Hall of Atlanta, GA, Clyde Hall of Warrenton, VA, and Deborah Morabito of Huntington, WV. The funeral service for Mrs. Damon will be held at 11 o’clock Friday, April 15th at Holy Trinity Greek Orthodox Church with Rev. Fr. Michael A. Platanis officiating. Prior to the funeral a Trisagion service will begin at 10 o’clock in the church sanctuary with visitation following until the funeral service. A private burial will be held at Fort Jackson National Cemetery. Shives Funeral Home, Trenholm Road Chapel, is assisting the family. Memorials may be made to Holy Trinity Greek Orthodox Church, 1931 Sumter Street, Columbia, SC 29201.

The family of Mrs. Judith Hall Damon created this Life Tributes page to make it easy to share your memories.

Send flowers to the Damon family.