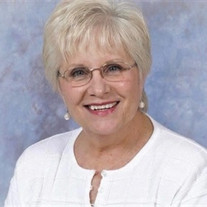 Julia Marie McLean Dever, 74, of Columbia, went to be with her Lord and Savior Sunday, January 31, 2021 at Lexington Medical Center, West Columbia, SC. Born February 12, 1946, in Springfield, Ohio, she was the daughter of the late Francis “Frank” James McLean and Dorothy Jane Churco McLean. Julie graduated from Springfield Catholic Central High School, and later attended University of South Carolina. She had a varied career that included cosmetology, real estate, and had a successful wallcovering business. Prior to her retirement, Julie was employed for many years at First Presbyterian Church in Columbia as the pastoral care secretary. In her spare time, she loved to be with her family, especially her precious grandchildren. She also enjoyed gardening, sewing, and baking. Julie was a committed follower of Christ, and her faith informed all that she did. When her parents were killed in a car accident in 1969, Julie and her husband Mark, at the age of 23, took in her five youngest siblings, ages 8 to 18. After they were raised, she and her husband relocated to South Carolina in 1979. There she was instrumental in forming Tough Love, a parenting group, in her area. Julie also volunteered with Right-to-Life and attended many “March for Life” events in Washington DC. She held positions with her county Republican Party, and worked the polls for many years. She was a devoted member of Saint Andrews Presbyterian Church in Irmo SC, where she sang in the choir and was involved in various church activities, including a weekly bible study share group. Survivors include her husband of 54 years, Mark Jeffery Dever; son, Kurt Jeffery Dever (Jamie Marie) and daughter Cathleen Dever Collins, both of Lexington SC; grandchildren, Ashley Marie Dever, Haley Cathleen Swett, Rachel Michelle Dever, Heather Nicole Dever, and Ethan Elihu Collins. Julie is also survived by her siblings, Peggie Sims (Ron) and Donna Young (Robb) of Springfield OH, Marilyn Spragg of New Bremen OH, James McLean (Diane) of Le Roy NY, and Joanne McLean of London OH; sisters-in-law, Lisa McLean of Sealy TX and Marcia Dever Osmon (Aaron) of Lake Placid FL; brother-in-law, Allen Dever (Rose) of Spokane WA; many nieces, nephews and cousins, as well as her two dogs, Ella and Howie. In addition to her parents, she was preceded in death by her brother, Fred McLean and her son-in-law, John Loren Collins. There will be a private memorial service for the family at Saint Andrews Presbyterian Church. Inurnment will be at Fort Jackson National Cemetery. Shives Funeral Home, Trenholm Road Chapel, 7600 Trenholm Road Ext., Columbia, SC is assisting the family. A livestream of Mrs. Dever’s service will be available at 1 o’clock, Tuesday, February 9th by visiting her tribute page at ShivesFuneralHome.com. In lieu of flowers, memorials may be made in Julie's name to www.sclife.org and familyhonor.org.

The family of Mrs. Julia M. Dever created this Life Tributes page to make it easy to share your memories.

Julia Marie McLean Dever, 74, of Columbia, went to be with her...

Send flowers to the Dever family.