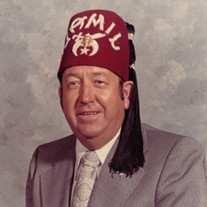 Funeral services for Julian Ellis Johnson, Sr., 91, of Ridgeway, will be held on Sunday, August 8, 2021 at 3pm at Westminster Presbyterian Church, with Rev. Dr. Chris Denny and Rev. Dr. Dudley Weaver officiating. Burial will follow the service with Masonic Rites in Elmwood Cemetery. Prior to the service, a visitation will be held at the church beginning at 2pm. Mask are required and social distancing is requested to maintain a safe environment for all attending. In lieu of flowers, memorials may be made to Westminster Presbyterian Church, 1715 Broad River Road, Columbia, SC 29210; or the Jamil Shrine Center, PO Box 210578, Columbia, SC 29221; or to the charity of one’s choice. Shives Funeral Home, Trenholm Road Chapel, is assisting the family. Julian died August 5, 2021. He was born in Columbia, SC on January 30, 1930. He was a son of the late Wade Ellis and Lula Mae Lever Johnson. He was a graduate of Columbia High School. He was employed by The City of Columbia and Esso. In June 1958 he married the love of his life, Frances Judson (Johnson) Johnson. In 1959, he founded the Columbia Trailer Gas Company. In 1961, the late William L. Keefe became his partner until they sold the business in 1990. He retired to enjoy his hunting and fishing. He enjoyed going to his place on St. Helena Island, SC. He enjoyed cooking and entertaining his friends at The Creek, Ridgeway, SC, and St. Helena Island, SC. He had the love of music and enjoyed waltzing, shagging and square dancing. He was a member of Westminster Presbyterian Church since 1967 where he was a deacon and Chairman of the Building and Grounds committee. He was a member of the Home Guard during World War II, a sergeant in the South Carolina National Guard, the Dutch Fork Masonic Lodge, York Rite, and Jamil Shrine Center where he served as Chief Aide, Assistant Chief Aide, Director of the Aides, Assistant Director of Personal Aides, Chairman of the Decoration Committee, and Jamil Characters where he served as treasurer. Survivors include his beloved wife; sons, Julian E. Johnson, Jr., and Judson Hampton Johnson, Sr. (beloved daughter-in-law, Robin); his apple of eye grandsons, Judson Hampton Johnson, Jr. (Lakyn) and Heyden Linden Johnson, and Dusty Vicker (Jessica); special “adopted” family, Randall and Stephanie Mungo and their precious daughters, Brianna and Madalyn, which he considered our precious granddaughters; sister, Betty J. Mann; nieces and nephews; great nieces and nephews; and great-great nieces and nephews. He was preceded in death by his parents; his father-in-law and mother-in-law, William Judson Johnson and Florence Powell Johnson; his daughter-in-law, Linden M. Johnson; his brother, Wade Lamar Johnson (Elizabeth); and brother-in-law, James Mann, Sr. The family is grateful to Kaye James, Monica Reaves, and all others with Heart of Hospice who gave him excellent care during his recent illness; to Darrell Maxwell, with DayBreak; and also to Gerald Fishman, MD, Rodney Rhinehart, MD and Niall McLaughlin, MD, for the many years of excellent care he received. The following special people will serve as honorary pallbearers: Billy Johnson, Jerry Rhodes, The Jamil Characters and Characteretts, Bland and Robin Walker, Steve Kirkland, Gerald Fishman, MD, Rodney Rhinehart, MD, and Niall Mclaughlin, MD, Leroy Byas, Harris Byas, Jr., and Bobby Dawson. Serving as active pallbearers will be Charles Pardee, Sr., David W. Hollis, James Mann, Jr., William Lynch, Russell Pardee, Charles Pardee, Jr., Steve Lever, Robbie Hazle, and Van Forrest.

The family of Mr. Julian E. Johnson, Sr. created this Life Tributes page to make it easy to share your memories.

Send flowers to the Johnson family.