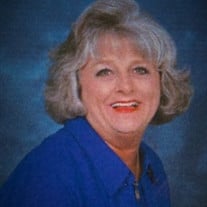 Karen “Kay” June Tolson Riley, 70, of Columbia, died at her home on June 20, 2021. Born in Timmonsville, South Carolina on October 18, 1950, she was the daughter of the late Charles Foster and Sue Nell Lyles Tolson. Survivors include her husband of 53 years, Emory “Dean” Riley; sons, Douglas Riley (Ashley) and Brian Riley; grandson, Davis Riley; sister, Ann Lott (Glenn); in-laws, Sara Chisholm (Frank), Susan Darby, and Sandra Kelly (Todd); as well as a host of nieces, nephews, and other family members. In addition to her parents, she is preceded in death by sisters, Rose Hyman and Priscilla Tolson; brother, Charles Tolson; brothers-in-law, Carson Hyman, David Riley, and Chris Darby. Kay graduated from A.C. Flora High School in 1968. She married the love of her life in June of 1968. She was employed by Banker’s Trust before beginning her career with the South Carolina Budget and Control Board in 1972, where she worked until she retired in 2006 as the Finance Director. After retirement, she continued to serve the state of South Carolina as a consultant on the SC Enterprise Information System (SCEIS) project, where she was instrumental in the success of the statewide implementation of the accounting system. She ended her career with the Education Foundation at the University of South Carolina. Kay became the first female president of the South Carolina Government Finance Officers Association in 1990. She was well respected by her peers and considered an expert in her field where she mentored many. Kay was an active member of Virginia Wingard Memorial United Methodist Church where she served many roles, including treasurer. Her grandson, Davis, was the apple of her eye and she loved spending time with him and supporting him in his various activities. She loved spending time with her family and friends - whether for just a visit or going on an adventure. Kay was a caring and vibrant person who was loved by many. She also volunteered her time at Lexington Medical Center delivering flowers to patients. The funeral service for Mrs. Riley will be held 11 o’clock Thursday, June 24th at Virginia Wingard Memorial United Methodist Church, 1500 Broad River Rd, Columbia, SC 29210 with Reverend Beth Faulk officiating. The family will receive friends prior to the funeral at the church welcome center beginning at 9:30 o’clock. Shives Funeral Home, Trenholm Road Chapel, 7600 Trenholm Road Ext., Columbia, SC, is assisting the family. A private burial will be held at St. Paul Cemetery in Cartersville, SC. Serving as active pallbearers will be Keith Taylor, Glenn Lott Jr., Gary Lott, Doug Lott, Chad Darby, and Austin Kelly. Honorary pallbearers will be John Dent, Danny Rawl, Larry Shull, and Earl Mikell III. The family would like to extend special thanks to Senior Matters, especially Tyra Kingston, who Kay loved dearly. In lieu of flowers, memorials may be made to Virginia Wingard Memorial UMC, CurePSP, 1216 Broadway, 2nd Floor, New York, NY (PSP.org), or Pawmetto Lifeline, 1275 Bower Pkwy, Columbia, SC 29212 (Pawmettolifeline.org).

The family of Mrs. Karen June Tolson Riley created this Life Tributes page to make it easy to share your memories.