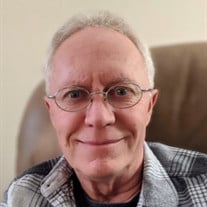 Kenneth Stanley Moore, Jr., of Blythewood, SC, joined our Lord Jesus Christ on Friday, July 9, 2021, with family by his side in Columbia, South Carolina. He was 69 years old. Ken was born February 22, 1952, to Kenneth and Wanda Lou Moore in Ardmore, Oklahoma. He was raised in Lubbock, Texas, where he graduated from Texas Tech University with a degree in business. While working in computer management, he met Lorraine, and married in 1994. Ken continued to work in various management positions until retirement. Ken was a very active person and enjoyed running, camping and exploring. He had a brilliant mind and enjoyed a lifetime of learning and experimenting – he was skilled at carpentry, engineering, mechanics, and even built computers and robots. In his later years, Ken was enthusiastic about getting to know and serve the Lord. He dedicated his time to studying the Bible and giving testimony to loved ones, as well as those he didn’t know, with the goal of sharing God’s wisdom with others. He was active in the Samaritan’s Purse and In Touch Ministries charities, and he took part in helping disaster relief efforts through his charitable work. He was a loving man and a good neighbor, who loved serving God, spending time with his wife, riding his bike, working in his yard, and helping others. Ken is preceded in death by his parents, Kenneth and Wanda Lou Moore, his sister-in-law, Christy Moore. Ken is survived by his wife, Lorraine Moore; his brother, Jon Moore; his children: Kenda Burleson, Melissa Pollard (Chris), Kenneth Moore III (Kelsea), and Julie Eck; his niece, Jennifer Moore (Ian); his grandchildren: Anissa Pollard-Stephens (Kyle), Aubre Pollard-Shelby (Derek), Ryan Pollard (Laci), Kathryn Plouffe (Jacob), Braxton Moore, Addyson Pollard, Harlea Moore, Kaylea Moore, Caleb Eck, and Dylan Eck; his great-grandchildren: Cannon and Levi Shelby; uncle, Dr. Roger Moore, as well as his beloved cat, Alley, In lieu of flowers, the family requests that donations be made in Ken’s honor to Samaritan’s Purse, In Touch Ministries, or Sandy Level Baptist Church.

Kenneth Stanley Moore, Jr., of Blythewood, SC, joined our Lord Jesus Christ on Friday, July 9, 2021, with family by his side in Columbia, South Carolina. He was 69 years old. Ken was born February 22, 1952, to Kenneth and Wanda Lou Moore... View Obituary & Service Information

The family of Mr. Kenneth Stanley Moore, Jr. created this Life Tributes page to make it easy to share your memories.