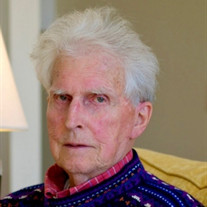 Leif Erik Maseng of Columbia passed away peacefully on Thursday afternoon, July 1, 2021, a month shy of his 97th birthday. Leif was a registered professional engineer and a pioneer in designing and building America’s interstate highway system, as well as transportation systems around the world. The loving husband of the late Betty Maseng and father of three daughters, he was devoted to his family and an example to them of courage, strength, honor and love. He was born in Chicago, Illinois on August 17, 1924 to Stella Nissen Maseng and Trygve Maseng, Scandinavian immigrants. He graduated from Arlington Heights High School where he played both football and basketball. Leif found great meaning in being an Eagle Scout, and it filled him with pride and joy to pin the Eagle Scout badge on his grandson, David Maseng Will. He often attended the Eagle Scout ceremonies of the children and grandchildren of friends. He began his engineering training by attending the University of Illinois. During the Second World War he volunteered for service as a paratrooper for the 82nd Airborne Division, and participated in major engagements from “D” Day — parachuting behind the lines the night before the assault — to the Battle of the Bulge, where he was wounded. After six months of hospitalization in Scotland, he returned to the United States and graduated from the Corps of Engineer Officers Candidate School. Returning to the University after the war, he married Betty Hagen in December 1948. After a year of employment in his father’s electrical engineering firm in Chicago, he worked as an electrical designer of machinery controls for Kraft Tools Company. Later he was employed by Hoyelet and Erdal, where he finally had his first opportunity to practice in his chosen profession, civil and highway engineering. Moving on to the consulting firm of C.D. Fuller Engineers in Lexington, Kentucky, he participated in the design and construction supervision of the Kentucky Interstate Highway network, including segments of I-64, I-71 and I-75. Other major road projects during this period included parts of the Mountain Parkway in East Kentucky and the Western Kentucky Parkway. During his work on the Mountain Parkway, his firm was a member of the consulting engineering team under the overall direction of Wilber Smith and Associates. In 1964 he joined that firm and moved his family to the company’s head offices in Columbia, SC. During this period he was responsible for planning and design of segments of I-20 in Aiken County, prior to accepting a four-year assignment as chief engineer and manager of the Australian office of the firm in Melbourne. During the period he directed the design of the first highway to be built in the State of Victoria, the Mulgrave Bypass. A variety of other transportation planning and design projects were completed during this period, including in Adelaide, Brisbane and Canberra, as well as in Auckland, New Zealand. Returning to South Carolina for continuing assignments with the firm, he participated in numerous transportation planning projects in the central and southeastern US, as well as in Greece, Ireland and Nicaragua. Current and past professional association memberships include the Institute of Transportation Engineers, the American Society of Civil Engineers, the National Society of Professional Engineers and the South Carolina Society of Engineers. Leif was a member of First Presbyterian Church in Columbia and a member of the Men’s Sunday School Class. He served his church as a Chairman of the Board of Deacons, as a ruling elder and later received the honor of Elder Emeritus for his many faithful years of service. He was an active board member of the Golden K Kiwanis, and served as its president. He was a member of the Summit Club, the Veterans of the Battle of the Bulge, and Columbia Green. He also was a member of the University Associates and the Cooper Society of the University of South Carolina, and was certified as a Master Gardener by Clemson University. Leif was a loyal University of South Carolina Gamecock fan and was a member of the The Gamecock Club, Touchdown Club and the Tip Off Club. Surviving are his daughters Nancy Elise Maseng of Columbia; Mari Maseng Will (George) of Chevy Chase, MD; Lisa Ann Maseng (Richard White) of Columbia; granddaughter Parke Espy Jones (Brandon) of Columbia; grandson David Maseng Will of New York; nine step-granddaughters and step-grandsons, including Nick, Max and Joy White of Columbia; great-grandson Erik Jones and seven step-great-grandchildren. A memorial service will be held at 11:00am on Thursday, July 8, in the sanctuary of First Presbyterian Church with visitation to follow in Jackson Hall. Funeral arrangements are being coordinated by Shives Funeral Home, Trenholm Road Chapel.

Leif Erik Maseng of Columbia passed away peacefully on Thursday afternoon, July 1, 2021, a month shy of his 97th birthday. Leif was a registered professional engineer and a pioneer in designing and building America&#8217;s interstate highway... View Obituary & Service Information

The family of Mr. Leif Erik Maseng created this Life Tributes page to make it easy to share your memories.

Leif Erik Maseng of Columbia passed away peacefully on Thursday...

Send flowers to the Maseng family.