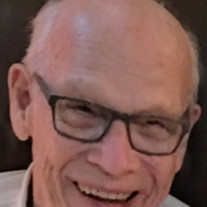 Maj. Leon Otis Gantt, US Air Force, (Ret.), 86, of Columbia, died Friday, August 28, 2020. Born July 31, 1934 in Columbia, SC, he was a son of the late Otis Legare Gantt and Callie Bell Jeffcoat Gantt. A member of Shandon Baptist Church, he was a graduate of the University of South Carolina where he earned his Bachelor of Science in Business Administration. Maj. Gantt, a retired Air Force veteran, proudly served his country for 22 years. During his military career, he was stationed in Germany, Japan, and Alaska. Following his retirement, Maj. Gantt went on to work for Policy Management Systems Corporation in Blythewood, SC. He was an avid Gamecock fan and enjoyed being outdoors, especially fishing. Maj. Gantt had a wonderful sense of humor, often referred to as the Master of Puns and Dad Jokes. He talked to everyone as if they were a long lost friend; never meeting a stranger. Above all, Maj. Gantt loved and cherished his family. He never missed a family gathering. Survivors include his loving wife of 63 years, Iva Jean Chandler Gantt; children, Stephen Gantt (Terri), Jean Herron, Candace Bender (Mark), Cathy Shealy (Brad); grandchildren, Douglas Gantt, Dana Gantt, Evan Herron, Samantha Bender, Zachary Bender, Brennan Shealy, Jack Shealy, and Ella Shealy; and aunt, Doris Pike. In addition to his parents, he was preceded in death by his brother, Everett Legare Gantt; and sister, Willie Mae Gantt Sturkie. The funeral service for Maj. Gantt will be held 11:30 o’clock, Wednesday, September 2nd, at Shives Funeral Home, Trenholm Road Chapel, 7600 Trenholm Road Ext., Columbia, SC, with The Rev. Dennis Banks officiating. Burial with military honors at Ft. Jackson National Cemetery will follow at 1 o’clock. The family will receive friends prior to the service at the funeral home beginning at 10 o’clock. Those who wish to pay their final respects to Maj. Gantt may also do so between the hours of 10 and 5 o’clock, Tuesday, September 1st at the funeral home. In lieu of flowers, memorials may be made to Shandon Baptist Church, 5250 Forest Dr., Columbia, SC, 29206, or to the American Cancer Society,200 Center Point Cir., Ste. #100, Columbia, SC., 29210. Everyone is invited to attend but will be asked to abide by the state’s recommendations of wearing masks and social distancing to provide a safe environment for all. A livestream will be available by visiting his tribute page at ShivesFuneralHome.com.

The family of Mr. Leon Otis Gantt created this Life Tributes page to make it easy to share your memories.

Send flowers to the Gantt family.