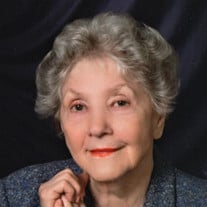 Mrs. Lillian Wright Bollin Lawrence, 98, of Columbia, was the Matriarch of the Bruton Family, Lillian was known by many and loved by ALL. Lillian Wright Bollin was born in Columbia, South Carolina on December 28, 1922, to the late Mary Bruton and John H. Bollin. The oldest of three siblings, she was raised in Columbia, she attended Columbia city schools and graduated from Dreher High school in 1940. Lillian then attended the University of South Carolina, Parsons School of Design, and participated in many college activities, including her membership in the Kappa Delta Sorority. During WWII, Lillian moved to New York City, where she lived with friends and worked. Lillian was introduced to Samuel Eugene Lawrence, Jr. by mutual friends. Sam was an officer and fighter pilot in the U.S. Air Force. Sam and Lillian married in April 1948 and traveled quite a lot on different military assignments, including Japan. When returning to civilian life, they settled in South Carolina for a few years. In 1958, Sam and Lillian moved their three children to Ocala, Florida, where they had a large farm, built a custom home, raised cattle, and grew oranges. In addition to raising the three children, Lillian was involved in the Junior League and church activities. She was very active in the Grace Episcopal Church Boy’s Choir and traveled with the choir to perform in England. In 1972, Sam and Lillian sold their farm in Ocala and moved back to South Carolina, where Lillian participated in the Junior League, the Columbia Assembly, and worked in the kitchen at Trinity Cathedral and the Trinity Annual Bazaar. Lillian was also a member of The Club, The Junior League Fiction Club, and volunteered at the Columbia Museum. She acquired a love for exercising and running, which continued into her nineties. After Sam’s death, Lillian moved to Still Hopes Episcopal Retirement Community in 2005, where she was busy with many of the available activities. She reconnected with many of her lifetime friends who also lived at Still Hopes. Lillian’s family is forever grateful to the staff and nursing care Lillian received while a resident at such a special place in her life. Lillian lived a very long and satisfying life and will be missed by so many whose lives she touched with her love. Lillian was predeceased by her husband, Samuel Eugene Lawrence, Jr; and her sisters, Joan Bollin Oliphant and Mary Bollin Hensel. She is survived by her children, Lucy Lawrence Marriott (Ted) of Marietta, Georgia, Samuel Eugene Lawrence, III (Susan) of Tega Cay, SC, and John Bollin Lawrence (Dawn) of Mt. Pleasant, SC. She also had grandchildren, Joseph Lawrence Boze (Andrea), Ashley Marliese Boze Northcutt (Kyle), and Heather Marriott (Noah Wells). Lillian was also blessed with two great-grandchildren, Henry Wells and Jayden Lawrence Boze. A service will be held 11 o’clock, Saturday, June 12th, at Trinity Episcopal Cathedral. The burial will be in the church cemetery and the family will receive friends following the service in the churchyard. Shives Funeral Home, Trenholm Road Chapel, is assisting the family. In lieu of flowers, memorial gifts may be made in Lillian's honor to the Association to the Prevention of Cruelty to Animals (ASPCA) at www.aspca.org, Trinity Cathedral, 1100 Sumter Street, Columbia, SC 29201 and Still Hopes Resident Assistance Fund, 1 Still Hopes Drive, West Columbia, SC 29160.

The family of Mrs. Lillian Bollin Lawrence created this Life Tributes page to make it easy to share your memories.

Mrs. Lillian Wright Bollin Lawrence, 98, of Columbia, was the...

Send flowers to the Lawrence family.