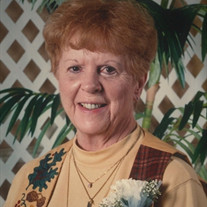 Linda Sue Lehman Shumard, 84, of Columbia, died Sunday, January 3, 2021. Born December 7, 1936, in Cuyahoga Falls, Ohio, she was the daughter of the late Walter Torrence Lehman and Angie Vivian Penrod Lehman. Mrs. Shumard was raised in Cincinnati, Ohio and later received her bachelor’s degree in nursing from the Bethesda School of Nursing. Until her two sons were in their teens, she was a stay-at-home mother. Later, she went to work with Richland County Home Health as a registered nurse. Mrs. Shumard would eventually retire after several decades of service. Like most nurses, Mrs. Shumard was known for her loving and caring demeanor. Throughout her life, she enjoyed traveling stateside, bowling, and square dancing. Most recently, she loved to regularly have breakfast with a special group of close friends. Mrs. Shumard was a previous member of the National Society of Autistic Children and was involved in various veteran organizations. She loved her dogs and considered them to be part of her family. Of all the roles she had in life, her favorite was that of “Grannie” to her grandchildren. Survivors include her sons, Brian C. Shumard and Russell W. Shumard (Leah); grandchildren, Russell A. Shumard and K. Olivia Shumard; longtime companion, Robert “Bob” Taylor; nephew, Jimmy Lehman; niece, Janet Wessel; as well as many other extended family and friends. In addition to her parents, she was preceded in death by her brother, Russell E. Lehman and several well-loved dogs. A memorial service for Mrs. Shumard will be held 2 o’clock Saturday, January 9th at The Edge Church, 3220 Platt Springs Road, West Columbia, SC 29170 with Pastor John T. Lastinger, Jr. officiating. The family will receive friends prior to the memorial service at the church beginning at 1 o'clock. Shives Funeral Home, Trenholm Road Chapel, 7600 Trenholm Road Ext., Columbia, SC is assisting the family. Everyone is invited to attend but will be asked to abide by the state’s recommendations of wearing masks and social distancing to provide a safe environment for all. Memorials may be sent to the Vietnam Veterans of America, Chapter 303, PO Box 2001, Columbia, SC 29202.

The family of Mrs. Linda Sue Shumard created this Life Tributes page to make it easy to share your memories.

Send flowers to the Shumard family.