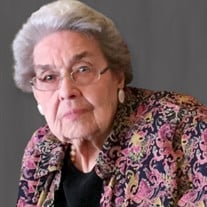 Louise Clements Holden, 95, died early Saturday morning, August 29, 2020, in Columbia, SC. Beloved wife, cherished mother, and good friend, she was born Mamie Louise Clements on February 14, 1925, the daughter of the late Edgar Lewis Clements and Mamie Lenora Dukes Clements. Mrs. Holden was preceded in death by her devoted husband of 45 years, James Carlton Holden. Mrs. Holden graduated from Lynchburg High School, Lynchburg, SC, as valedictorian of her class. After graduating from Winthrop College with a B.S. in Home Economics, she taught in Aynor, SC, and then became a Home Demonstration Agent in Georgetown County, where she provided a weekly radio broadcast and met her devoted husband Carlton (or “J.C.” as she affectionately called him). On August 20, 1950, Mrs. Holden and her sister, Lottie, were married in a double wedding ceremony to their respective grooms, James Carlton Holden and John William Cordray. With her devotion to God, sweet disposition, and willingness to serve, Mrs. Holden was a tremendous support to her husband’s ministry as he pastored numerous United Methodist churches in South Carolina. While accompanying her husband to his appointments, she taught elementary, middle, and high school grades in schools throughout the state. Mrs. Holden enjoyed spending time with her husband, daughter, and sisters, as well as other family members. After retirement, she enjoyed volunteering with Meals on Wheels and the annual Christmas bazaar/ barbecues at St. James United Methodist Church, where she was a member until it closed. Mrs. Holden is survived by her daughter, Elizabeth Louise Holden; sister-in-law, Gwen Clements; as well as numerous nieces, nephews, great nieces, great nephews, and friends. She will be greatly missed by those who loved her. She was predeceased by her sisters, Anne Clements, Lottie C. Cordray, and Betty C. Carmichael; her brothers, Edgar Lewis Clements, Jr., George Russell Clements, and Robert Spann Clements; as well as several nieces and nephews. The funeral service for Mrs. Holden will be held at 2 o’clock, Wednesday, September 2, at Bethel United Methodist Church, 4600 Daniel Drive, Columbia, SC 29206, with The Rev. Julie Belman and The Rev. Dr. James Nates officiating. A graveside service will follow at Elmwood Cemetery, 501 Elmwood Ave., Columbia, SC 29201, beside her beloved husband Carlton. Shives Funeral Home, Trenholm Road Chapel, is assisting the family. Masks and social distancing are required. For those unable to attend, a livestream of the service will be available by visiting her tribute page at ShivesFuneralHome.com In lieu of flowers, memorials may be made to Bethel United Methodist Church, 4600 Daniel Drive, Columbia, SC 29206, or to the charity of your choice.

The family of Mrs. M. Louise Clements Holden created this Life Tributes page to make it easy to share your memories.

Send flowers to the Holden family.