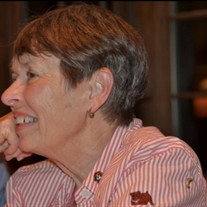 Marcia Rushworth Beazley, 79, died Tuesday after a brief illness. She was born in a small town near Pittsburg, PA, and moved to Chattanooga, TN, when she was six. After graduating from Chattanooga High School in 1960, she began her college career, met a dashing young man, Paul Winslow Beazley, and married him in 1963. Paul was a student at the Union Presbyterian Seminary in Richmond, so they began their married life there. Upon Paul’s graduation, they moved to Hamlet, NC, where Paul was a minister to two churches. They ran a Presbyterian youth camp outside of Charlotte, NC, and it was there that their son Paul Derrick Beazley was born. Marcia and Paul moved to Columbia, SC, in 1970 and she found a position with South Carolina National Bank where she worked in marketing research, was head of SCN’s statewide public relations department and headed up the statewide training efforts for tellers, customer representatives and the sales efforts for the retail bank. When she retired from what was then Wachovia, Marcia was a vice president. She also completed her college education with a degree in business from Columbia College. After her retirement, she ran a consulting firm that specialized in sales and service training. During her banking career she was a member of the Public Relations Society of America, and assisted with classes for the American Institute of Banking in SC. She was always active in supporting causes for civil rights and for the last several years she was an active volunteer at the Columbia Employee Gym and with Pet Partners of the Midlands in addition to visiting retirement centers with her pet therapy dogs for many years. Throughout her life, Marcia loved, almost more than anything, babies and animals. She had a special way with both, and they responded accordingly. She held her nieces and nephews dear and was the best friend anyone could have. She was always willing to pitch in and help with a work-related project, a birthday party or a good time. She especially loved to share sunsets on Sunset beach and looked forward to spending her birthday there each year. Marcia was the daughter of the late Ellwood Derrick Rushworth and Elizabeth Marshall Rushworth and the wife of the late Paul Winslow Beazley. She is survived by her son Paul Derrick Beazley (Jennifer) and her grandson Ethan Jackson Beazley of Conroe, TX. Marcia is also survived by her siblings Derrick George Rushworth (Suzanne) of Chattanooga, Marilyn Rushworth Hayward (Nathan III) of Willington, DE, and brother-in-law, Charles Beazley (Judy). Along with many loving nieces and nephews, Marshall Rushworth (Courtenay), Rachel Rushworth-Hollander (Chris), Elizabeth Bradford (Nick), Nathan Hayward IV (Zenay), George Stewart Marshall Hayward (Mimi), Jonathan Beazley (Kim), Stuart Beazley (Martha), Eric Beazley (Mary), and Lauren Wallace Tennes. Services will be held at 2 p.m. on Sunday, November 14, in the chapel of the Lutheran Seminary in Columbia with a visitation in Reinartz Hall of the Seminary following the memorial service. Masks will be required for both the service and visitation. For those unable to attend the services in person, they will be broadcast live on Facebook at Marcia Beazley Memorial. Memorials in honor of Marcia R. Beazley should be made to Riverbanks Zoo (500 Wildlife Parkway, Columbia, SC 29210) or to Pet Partners of the Midlands (Pet Partners US, 345 118th Ave. SE, Bellevue, WS 98005-3587).

Marcia Rushworth Beazley, 79, died Tuesday after a brief illness. She was born in a small town near Pittsburg, PA, and moved to Chattanooga, TN, when she was six. After graduating from Chattanooga High School in 1960, she began her college... View Obituary & Service Information

The family of Mrs. Marcia Rushworth Beazley created this Life Tributes page to make it easy to share your memories.

Send flowers to the Beazley family.