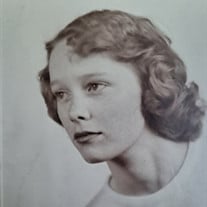 Margaret Elyn Wallace Stewart, 84, died peacefully on Sunday, Oct.31, 2021. Born Nov. 4, 1936, in York, S.C., she was preceded in death by her parents, Leslie (Pete) Ervin Wallace and Lottie Allen Wallace, and her beloved husband of 65 years, James F. Stewart. Elyn’s family nickname was “Boots” because she was so tiny at birth that she could fit inside a boot. Her brother, Ervin, still refers to her that way. Known for her quick wit and entertaining stories about growing up in the rural South, she proudly became an Army wife in 1955, when she married the love of her life, James. Elyn was a devoted wife and mother who kept a spotless house at all times. She spent many years helping her daughter Donna’s Girl Scout troop. Donna recalls that when her mother served as the troop’s cookie chairman, the living and dining rooms were filled with cases and cases of cookies. When her son, Jimmy, was in school, Elyn was an active supporter of Richland Northeast High School’s Silver Cadet Band, serving as a chaperone and Band Mom on many band trips. Elyn loved to cook and bake, especially during the Christmas holidays. She would spend many hours baking delightfully scrumptious holiday treats. Her son, Jimmy, proudly delivered her cookies to the hospital laboratory staff with whom he works. Elyn never met a stranger. She could strike up a conversation with anyone, anywhere. She loved to chat on the phone, but the conversation was never about her – it was always about the person on the other end of the line. Elyn is survived by her brother, Roy Ervin Wallace (Diann) of Rock Hill, S.C.; children, Donna Marie Stewart Price (Jere) of San Antonio, Texas, and James Leslie Stewart (Leslie) of Columbia, S.C.; grandchildren, James Winston Price (Paulette), Jennifer Price Gribble (Paul), Jennie Victoria Stewart-Rodgers (Jon) and Dorothy Leslie Stewart; great-grandchildren, Jean Price, Vincent Price, Alaina Price, Connor Price, Logan Gribble and Rhyder Gribble; and two sisters-in-law, Patricia and Gloria Stewart. A graveside service is scheduled for noon on Tuesday, Nov. 9, 2021, at Fort Jackson National Cemetery, 4170 Percival Road, Columbia. Shives Funeral Home, Trenholm Road Chapel is assisting the family.

The family of Ms. Margaret Wallace Stewart created this Life Tributes page to make it easy to share your memories.

Send flowers to the Stewart family.