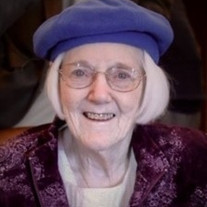 Margaret Rae Maclean Wharton, 90, of Columbia, died Saturday, October 31, 2020. Born October 5, 1930, in Pittsburgh, PA, she was the only daughter of the late Marcus Douglas Maclean and Mary Macdonald Maclean of Scotland. Mrs. Wharton was a graduate of Allegheny General Hospital School of Nursing, where she received her RN and California University in California, PA, where she received her BSRN. She would later earn her Clinical Nurse Specialist certification and her MPH from the University of North Carolina. From 1987 until 2000, Mrs. Wharton served as the director of the occupational health and safety programs unit for the University of South Carolina. She was formerly employed as the chief occupational health nurse at Steelcase, Inc., Western Division, as well as the senior occupational nurse for Atlantic Richland Company. She is survived by her two brothers, Douglas M. Maclean and Gordon H. Maclean, both of Wickenburg, AZ. In addition to her parents, she was preceded in death by a brother, William W. Maclean of TN. The funeral service for Mrs. Wharton will be held 2 o’clock, Friday, November 6th at Rose Hill Presbyterian Church, 229 South Saluda Avenue, Columbia, SC with Dr. Max Rogland officiating. For those unable to attend, a livestream of the service will be available by visiting her tribute page at ShivesFuneralHome.com. A private inurnment will be held at a future date in Jefferson Memorial Park, Pittsburgh, PA. Everyone is invited to attend but will be asked to abide by the state’s recommendations of wearing masks and social distancing to provide a safe environment for all. In lieu of flowers, memorials may be sent to the Robert Burns Society of the Midlands, PO Box 1953, Columbia, SC 29202-1953 or to Rose Hill Presbyterian Church, 229 South Saluda Avenue, Columbia, SC 29205.

The family of Ms. Margaret Rae Wharton created this Life Tributes page to make it easy to share your memories.

Send flowers to the Wharton family.