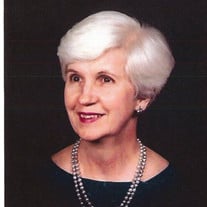 Marie Bittner Gimmi died peacefully on the afternoon of July 24, 2020, in Elgin, South Carolina at the age of 93. Marie was the dearly loved wife of the late Colonel Richard “Dick” F.B. Gimmi Jr. Marie was born on July 31, 1926, in Philadelphia, Pennsylvania. She graduated in 1945 from Germantown High School. In 1946 Marie met Dick, who was a first lieutenant in the United States Air Force, on a blind date arranged by Dick’s sister. Dick proposed to Marie only a few days after their initial date and marriage followed within a few months on October 12, 1946, in Philadelphia, PA. As the couple started their lives together Dick was now a reserve captain in the Air Force. With Marie’s support, Dick finished his bachelor’s degree at Franklin & Marshall College in Lancaster, PA. Marie was the sweetheart of his Lambda Chi Alpha fraternity. In 1949 Dick was recalled to Air Force active duty and Marie’s adventure as an Air Force pilot’s wife began. For the next thirty-three years, she and Dick were assigned and moved to various locations across the United States and internationally. Marie became a member of the Officers’ Wives’ Club whose activities prompted her interest in art and painting. During this time four children were also born and raised. Marie steadfastly supported Dick’s Air Force career including the times that Dick was on isolated tour of duty such as in Korea and Thailand/Vietnam War which required Marie to manage the household plus care for their children by herself. In his later years, Dick became extra vocal about Marie’s resilience and her heroism as a military wife. With Dick’s retirement from the Air Force in 1975, Marie and Dick made their home in Columbia, SC, and quickly became involved in their new community. Marie and Dick joined St. Paul’s Lutheran Church where they both sang in the choir. They held season tickets to the University of South Carolina Symphony Orchestra. Marie continued to paint and her enthusiasm for the subject led her to become a docent at the Columbia Museum of Art. Marie enrolled in classes at the University of South Carolina and in 1981 completed her Bachelor of Arts in Education followed by a Master’s of Arts in 1985. Marie subsequently taught art in the South Carolina public school system and then worked in the Midlands Technical College career administration department. Marie was known by friends and family for being stylishly well dressed and having a fun sense of humor. She enjoyed cooking and entertaining and was good at both. Marie played the piano, was an equestrian at various times in her life and loved painting-especially with watercolor. In official retirement, Marie and Dick enjoyed their North Carolina weekend mountain retreat and traveling. They also joined the Porsche Club of America where Dick and Marie spent stints driving fast on speedway courses, but most importantly they cherished being together. They were married 71 years at the time of Dick’s death in 2018. Their true love for each other is everlasting. Besides her husband, Marie was predeceased by her parents, Carl Martin Bittner and Marie “Mary” O’Brien Bittner; her brother, Carl Rudolph Bittner; and sister, Caroline Bittner Eichenhofer. Marie was a devoted and supportive mother. She is survived by her sons, Richard C. Gimmi, Russell M. Gimmi (Kathryne), Robert J. Gimmi, and her daughter Michel Gimmi Lee (Jim). She is also survived by four grandchildren, James C. Lee, R. Brien Lee, Angela, and Ryan J. Gimmi. Marie’s family extends appreciation to the team at The Blake at Woodcreek Farms, and to the team at Heart of Hospice for the kind care provided to Marie in her final few years. A graveside service will be held at Fort Jackson National Cemetery, in Columbia, SC on Friday, August 7th at 10 a.m. For those unable to attend, a Livestream will be available by visiting https://www.shivesfuneralhome.com/current-webcast/. Shives Funeral Home, Trenholm Road Chapel, is assisting the family. In lieu of flowers, memorial donations may be made to St. Paul's Lutheran Church, 1715 Bull St., Columbia SC 29201 or to the charity of your choice.

The family of Mrs. Marie Bittner Gimmi created this Life Tributes page to make it easy to share your memories.

Marie Bittner Gimmi died peacefully on the afternoon of July...

Send flowers to the Gimmi family.