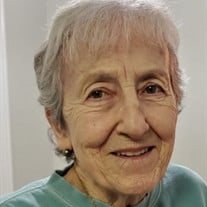 Ms. Marilyn Myers, 86, of 6312 Pinehill Road, Columbia, SC, passed away on August 12, 2021. Born in Punxsatawney, PA, to Berton F. Craft and Lavinia C. Craft, Marilyn was the fourth of five children: Willette Winters, Theona M. Brenneman, Berton R. Craft and Robert E. Craft. During her life, she was Head Nurse at Pennsylvania Hospital. In 1980, she received her master’s degree in Counseling from Marshall University in Huntington, WV., after which she held several positions as a psychiatric nurse. Her final position was Director of Treatment Services at New Hope of the Midlands. In 1996, she retired and moved to Edisto Island, which was a place she held dear in her heart, donating to organizations dedicated to land conservation and preservation. Even after retirement, she remained a counselor in heart and spirit until the end of her life. The solace of her wisdom will be deeply missed. Marilyn was predeceased by her son Philip E. Myers, four siblings, and ex-husband, Webster Myers, Jr. Surviving are her three children, Webster “Chip” Myers III, Paula Myers-Burns, and Elizabeth Myers, her two grandchildren, Ashley E.M. Burns and Liam M. Burns, her daughter-in-law Courtney W. Smith and grandson-in-law Paul G. DeHayes. A memorial will be held at 12 o’clock on Saturday, August 21st, 2021 at Shives Funeral Home, 7600 Trenholm Rd. Columbia, SC 29223.

The family of Ms. Marilyn Myers created this Life Tributes page to make it easy to share your memories.

Send flowers to the Myers family.