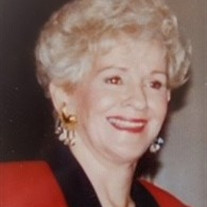 Mary K. Thompson passed away on November 22, 2020. Due to the Covid-19 pandemic, a private service will be held on Saturday, November 28th. The daughter of Henry and Bessie Koon, she was born July 30, 1930, in Greenwood, SC. Being the daughter of a Methodist minister, Mary’s family moved around a bit before settling down in Columbia when her father accepted the call to be the Chaplain at Fort Jackson. Mary attended Columbia High, where she was a cheerleader, served as secretary on Student Council, and was crowned Miss Columbia High. She would later marry her high school sweetheart. Mary enjoyed summers at Lake Murray with her family and beach trips to Edisto and Pawley’s Island. Her family was her life. Once her children became self-sufficient, she began working at Sylvan & DuBose Jewelers as a buyer and sales associate. Mary was a member of Incarnation Lutheran Church, where she taught Sunday school and was involved in her children’s activities. In her early years, she was a member of the Junior League of Columbia, Mimosa Garden Club, Settler’s Club, and Symphony League. Mary was famous for her festive Christmas Eve parties and Easters at Spring Valley Country Club. Having been a model for Tapp’s Department Store, she had a flair for fashion and always dressed to the nines, her hair perfectly coifed. She was a sweet soul, beautiful inside and out. In later years, Mary would marry a gentleman by the name of Jerry Thompson. They enjoyed their short time together traveling, spending time on Long Boat Key and in the mountains of Virginia, before he passed away after a brief illness. Mary would later move to her place on Gill’s Creek, where she was happiest tending her garden, taking great pleasure in sharing cuttings from her Confederate rose bush and Devil’s Backbone. She enjoyed being outside, observing the rhythm of nature on Gill’s Creek. Even after the flood in 2015, to hear her chilling account of the thundering sound of the water barreling downstream as it gushed into her home was terrifying. When asked if it scared her, she answered with a resounding “no.” Needless to say, she did not think twice about rebuilding and going right back to her urban oasis on the creek. In addition to her parents, Mary was preceded in death by her husband, Jerry Thompson; brother, Henry Koon, Jr; sisters, Helen Stroud and Doris McClain; as well as her daughter, Carol DuBose. She is survived by her son, Bruce DuBose; daughter, Janice Katz (Richard); grandchildren, Laura Cumalander (Tim), Matthew DuBose, Evan Katz; great-grandchildren, Colt and Stella Cumalander; and a host a nieces and nephews. The family wished to thank the staff and nurses at Wildewood Downs for their kindness and dedication to the wellbeing and care of their mother and to Amedisys Hospice for their care these last two weeks. Also, a heartfelt thanks to her good friend, Eva McLeod, who would drive her around to see the countryside. Shives Funeral Home, Trenholm Road Chapel, is assisting the family. Memorials may be made to Incarnation Lutheran Church, 3005 Devine Street, Columbia, SC 29205 or to the charity of one’s choice.

Mary K. Thompson passed away on November 22, 2020. Due to the Covid-19 pandemic, a private service will be held on Saturday, November 28th. The daughter of Henry and Bessie Koon, she was born July 30, 1930, in Greenwood, SC. Being the... View Obituary & Service Information

The family of Mrs. Mary K. Thompson created this Life Tributes page to make it easy to share your memories.

Send flowers to the Thompson family.