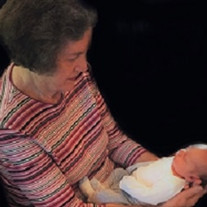 Mary Edith Thompson Warr, 88, of Columbia, died Friday, September 17, 2021. Born May 28, 1933, in Seneca, SC, she was a daughter of the late Daniel Dewitt Thompson and Lucy Frances Blackwell Thompson. In addition to her parents, she was preceded in death by her husband, Gerald Henson Warr. Granny, as most of us called her, graduated from University High School. She worked in a clerical position before marrying and raising her four children. For many years she had a home day care, helping to raise several children from birth to kindergarten. In raising her own children, she made sure they all went to church regularly, knew how to ride a bike and swim, and was bound and determined they had their piano lessons, no matter how much grumbling they did. After “retirement” she volunteered for several years at Lexington Medical Center as a Pink Lady, and began traveling with Frances Kull’s group trips and with her sister, Jerry. She enjoyed many bus trips in the United States, as well as international travel to Israel, Russia, Amsterdam, and England, just to name a few. Edith was an active member of Colonial Heights Baptist Church for many years, especially dedicated to the babies in the nursery. In recent years she enjoyed relaxing on her screened porch, reading, and working puzzles. She is survived by her sister, Jerry Thompson Cooke and her children, Ann Hollis (J.D.), Lynn Onley (Harry), David Warr and Dianne Mirmow (Dwight). Her grandchildren are Whitney Champion, (Adam) Meredith and Blaire Mirmow, and Michelle Onley (Ethan) and Derrick Onley. Her great grandchildren are Jax and Sloane Champion. A gathering for friends and family will be held 3 o'clock, Sunday, September 19th at Shives Funeral Home, Trenholm Road Chapel, 7600 Trenholm Road Ext., Columbia, SC. Memorials may be sent to Lighthouse Hospice, 110 Oak Park Drive, Irmo, SC, 29063.

Mary Edith Thompson Warr, 88, of Columbia, died Friday, September 17, 2021. Born May 28, 1933, in Seneca, SC, she was a daughter of the late Daniel Dewitt Thompson and Lucy Frances Blackwell Thompson. In addition to her parents, she was preceded... View Obituary & Service Information

The family of Mrs. Mary Edith Thompson Warr created this Life Tributes page to make it easy to share your memories.

Send flowers to the Warr family.